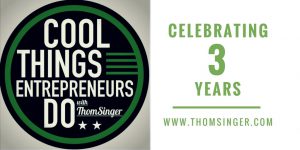 The 7 most downloaded Podcast Interviews of the past three years are listed below.  September 30, 2017 marks three years since the launch of the Cool Things Entrepreneurs Do Podcast.  With almost 300 episodes and 250 unique interviews there have been many amazing entrepreneurs who have come to share their knowledge with the show’s audience.

While every episode has had an amazing guest and interesting and inspiring ideas, these are the ones that the most people have heard.

Check out these great episodes.  If you like what you hear, reach out to me at thom@thomsinger.com or on Twitter @CoolPodcast.