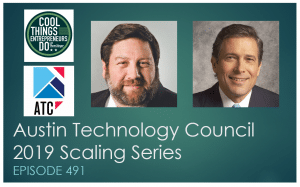 Episode 491 of “Cool Things Entrepreneurs Do” is co-produced in partnership with the Austin Technology Council, the largest tech industry organization in Central Texas. ATC empowers members by using insights, resources, and connections so their members can succeed and thrive. This conversation is focused on a new program, The ATC Scaling Series.
In this episode Thom Singer interviews Robert McKee and Dr. David Altounian about the new “Scaling Series” that will be hosted by the Austin Technology Council.
The 2019 Scaling Series is designed to equip your executives with the MBA-Level skills necessary to transform your company into a $10M-$100M in revenue enterprise. Each of your executives will join us for the evening session(s) that is(are) tailored to their area of discipline within your company during this 10-week seminar series. You will learn from MBA professors and expert practitioners who provide thought leadership around critical growth, operations, and governance issues to executives who are growing and scaling their business.
For more information or to register to participate, email Amber Gunst (amber@austintechnologycouncil.org).
The 2019 Scaling Series is in partnership with Rice Alliance, St. Edward’s University, and Baker Botts L.L.P.

Robert McKee is a managing director with Cypress Associates, a New York based investment banking firm.

Mr. McKee is a founder and a member of the steering committee of the Rice Alliance for Technology and Entrepreneurship – Austin Chapter.  He is also an advisor to Health Discovery Labs, an early-stage medical device company, and is a member of the board of trustees of St. Gabriel’s Catholic School.

Robert holds a bachelor’s degree from Rice University and an MBA from the Wharton School.

Dr. Altounian earned his Ph.D. at Oklahoma State University and his MBA at Kellogg School of Management at Northwestern University. He has almost 30 years of management and staff experience in the technology sector.

He was the Founder and CEO of Motion Computing, a leading provider of rugged tablet solutions for business. Prior to founding Motion, he was with Dell Computer Corporation, where he served in marketing executive positions for both the relaunch of the notebook computer business in 1994 and the creation and launch of the Precision workstation product businesses in 1997. He worked for two years in the United Kingdom as the General Manager, Workstation Line of Business for Europe, the Middle East, and Africa.  He also served as the Director of Dell Labs.

Dr. Altounian managed marketing and new business development teams for leading technology companies including Motorola, Compaq Computer Corporation, and Ashton-Tate.   He is a named inventor on 10 patents and a published author.

He is the Interim Dean and MBA Program Director at The Bill Munday School of Business at St. Edwards University. Dr. Altounian is a partner a Board Member of the Greater Austin Chamber of Commerce and the Austin Technology Council.

After a successful career in sales and marketing, Thom Singer became a full time keynote speaker speaker in 2009. A decade later he has brought his high energy presentations and action-oriented content to over 900 audiences. Thom knows that as the speaker or master of ceremonies he has a responsibility to set the tone for a strong conference attendee experience. Known as “The Conference Catalyst” he creates an atmosphere of fun and interaction that lasts beyond his presentation.

Thom earned his Certified Speaking Professional (CSP) in 2014 and is committed to the business of meetings. He is the author of 12 books and is the host of the popular “Cool Things Entrepreneurs Do” podcast. On his show he has interviewed over 400 entrepreneurs, solopreneurs, business leaders and others with a focus on discovering how the most successful people get farther across the gap between potential and results.

At 50 years old Thom decided to reinvent his life and make age 50 to 75 the best years of his life. This meant saying yes to things that scared him, and trying new things. Since that time Thom has jumped off buildings, took up running (and lost 30 lbs) and began performing stand up comedy.