Mix business with pleasure and you will enjoy the business much more. 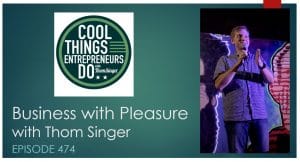 We always here “Don’t Mix Business with Pleasure”, but in episode 474 of “Cool Things Entrepreneurs Do” Thom Singer tells us how and why to take your passion and put it along side your business.  Yes, mix it up.  Try new things.  Create a way to put what you love into your job.
Thom spent most of his career with his ladder against the wrong wall.  As a kid he wanted to be an actor or comedian, but never did anything about it.  Now he is an advocate for others to find a way to pursue their dreams, even if just on the side.
In 2018 Thom tried, for the first time, stand up comedy.  Since then he has gone to about one open mic night a week, been a featured comic in three shows, and this week begins hosting a weekly open mic night every Wednesday in Austin, TX.  His love of comedy is making him a better professional speaker and master of ceremonies.

Thom also announces in this episode some details on his partnership with a comedy production company as their VP of Corporate Events.  In this role he will help the company create content on using humor and producing clean comedy shows for companies and associations. As comedy in the United States is soaring to record popularity (in part because of the investment that Netflix has made in the genre), there is more interest than ever in stand up. Thom has found his clients are interested in the story of his late life entry, and many would like to have training sessions on how business can learn from comedy and improv. Additionally he will be helping produce clean comedy shows for association and company conferences.
Thom is excited to mix business with pleasure. The addition of working with some local comics to create fresh content on how comedy can become a learning tool for business is something he has thought about since his first open mic night.  The level of learning about trying new things, long-term vision and commitment to career, and surviving failure are just a few of the things that real life comedians face daily.
As for producing comedy events for conference audiences, this will take some time to coordinate.  The idea was born when two associations who heard about Thom’s comedy journey asked if he could put on a show.  While the answer was “no” (he was not ready), the idea has grown and the time is now.  Thom is seeking experienced comedians who are “Corporate Clean” who are interested in being part of shows in Austin and beyond.

Thom Singer is the host of the “Cool Things Entrepreneurs Do” podcast. He is a keynote speaker and a professional master of ceremonies / emcee. He speaks at company meeting and association conferences across the United States.