From Bill Clinton Impersonator to Entrepreneur with Damian Mason 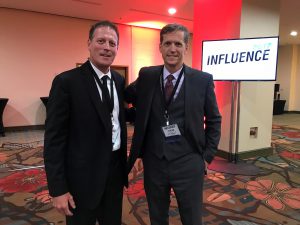 Damian Mason is an entrepreneur who wanted to find his own way in the world. In 1994 he quit a successful sales career to become a professional Bill Clinton Impersonator and never looked back. He created a successful career and life, but eventually the Bush Administration took over, and the need for Bill Clinton look-a-likes shrank.

Damian reinvented his career and now a successful professional speaker. He inspires audiences in the agriculture and small business arenas and provides powerful content while still entertaining.

Damian’s life on stage began in 1994 when he won a Halloween contest dressed as Bill Clinton. Within months, he resigned from his sales position with Cooper Industries (now part of Eaton Corporation) and launched his company, Executive Entertainment.

Politics change, and so does business. Damian is now in high demand for his savvy, provocative presentations in two leading areas: Reinvention and Agriculture. His high-energy, entertaining insights on reinvention and agricultural issues is what sets him apart.

The adaptations required for Damian to successfully stay ahead in his career have made him an expert in Business Reinvention. He’s taken the lessons learned from his own transformation, and insightfully packaged them with real-world case studies of other successful and failed brand reinventions. The result is an inspiring, humorous “How To” program for corporations, small business people, and employees to avoid obsolescence.

Damian also understands Agriculture. He was raised on a dairy farm, has a degree from Purdue University in Agricultural Economics, and currently owns and manages a farm in northeast Indiana. He stays up-to-date on issues impacting the industry of food, fuel, and fiber to deliver entertaining, provocative dialogue to Agricultural audiences.

In addition to speaking at events and meetings, Damian is also available for engaging appearances and interviews on television, radio, podcasts, and as a guest blogger or columnist. He can also be found on SiriusXM Radio – Laugh USA Ch. 98. Contact Damian for more information.

Damian studied comedy writing and improvisation at The Second City, Chicago. He’s a member of the Screen Actors Guild, and holds a Certified Speaking Professional designation with the National Speakers Association.

When he’s not traveling, Damian can be found on his Indiana farm with his wife Lori, or escaping from winter at their Arizona residence.
Check out this episode!