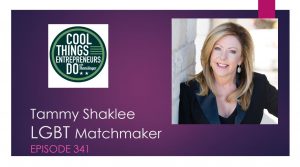 Tammy Shaklee is the “Gay & Lesbian Matchmaker” as a trailblazing straight ally. She is a former broadcast journalist, then district director for a Texas state senator turned ambassador to Sweden. After completing the acclaimed year-long business leadership program, Leadership Texas, Tammy followed her passion for mentoring by replicating a national mentoring program to prevent high school students from dropping out, was donor services director for a $150 million community foundation, then saved a Texas chapter of the Make-A-Wish Foundation as its CEO with aggressive increased revenues of 250%, receiving national recognition.

In 2012, Shaklee researched, designed, and founded H4M Matchmaking (H4M.com) in Austin, Texas. H4M is the private, offline, and personal matchmaking service designed exclusively for gay and lesbian professionals. Now serving clients from coast to coast including Texas lesbian women and bisexuals, H4M is leading a movement of more traditional introductions, courting and dating for today’s modern gay single seeking a monogamous long-term relationship. She believes the pro-equality movement invited straight allies to join in support. H4M is Tammy’s contribution to bring a traditionally straight service to the LGBT community.

Happily married to her husband she met through a matchmaker, Tammy consults in leadership, hosts a monthly salon of media-savvy women, blogs, mentors, is (still) working on her first book, and has filmed a “sizzle reel” for an unscripted reality show on tolerance and inclusion.

Tammy was a guest on the podcast 3 years ago (Episode 30). In that time her business has grown and expanded nationally. Check out this interview.