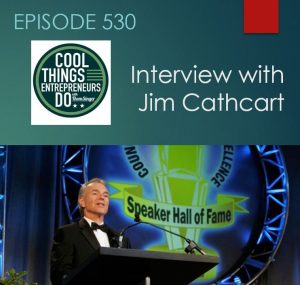 In this episode Thom Singer sits down with Jim Cathcart to talk about his life long career as a speaker. Jim started out seeking his path, but took him several jobs before finding his passion to educate others. Jim is the first guest ever on “Cool Things Entrepreneurs Do” to admit to having once been a door to door donut salesperson (Ha ha). This is also the only episode where the guest took out his guitar and played a song in the middle of the interview. Yes, Thom is a little star-struck, as while they are now friends, Jim Cathcart is one of the people who many years ago (before they met) inspired Thom to look at professional speaking as a career.

With over 35 years of professional speaking around the world, Jim Cathcart is one of the best known and most award-winning motivational speakers in the business. He has delivered more than 2,700 presentations to audiences in every state of the US, most provinces of Canada and countries from Scotland to Singapore. Some of his most recent international engagements were for thousands of business leaders in Bogota’, Colombia; Costa Rica; Panama; Warsaw, Poland; Santiago, Chile and Macau, China! A business strategist, pyschological researcher and philosopher at heart, Jim is also a down to earth regular guy. He has worked in warehouses, driven trucks, sold donuts door to door, been a bank teller, plays guitar in night clubs and pubs, and has toured much of the world on a motorcycle.

After hearing Earl Nightingale on the radio one day in 1972, Jim Cathcart was inspired to change his life. While working as a government clerk in the Housing Authority he determined to learn psychology and master the process of self-improvement. Through years of fanatical dedication to this quest he learned new skills, became a certified trainer for a variety of programs, read stacks of books, attended countless seminars and volunteered thousands of hours to civic organizations. In this process he moved from clerk, to manager, to sales person, to leader, to trainer, to author and professional speaker.

Today he is listed in the professional Speaker Hall of Fame, is a recipient of the prestigious Golden Gavel Award (along with Earl Nightingale, Art Linkletter, Zig Ziglar and many others), has been the president of the National Speakers Association and received the Cavett Award for a lifetime of service. He has authored 16 books and scores of recorded programs. In 2007 he was listed as one of The Top 100 Minds on Personal Development by Leadership Excellence magazine. The San Diego chapter of the National Speakers Association renamed their member of the year award “The Jim Cathcart Service Award” and the Greater Los Angeles chapter gave Jim the Lifetime Achievement Award in 2003. In 2008 he was inducted as one of the “Legends of the Speaking Profession.” And in 2010, 2011 & 2012 he was selected as one of the Top 5 Sales & Customer Service Speakers by Speaking.com in an online survey of over 13,000 people.

Thom Singer is a keynote speaker and a corporate master of ceremonies / EmCee.  He is the host of two podcasts and the the author of 12 books.