The New Networking for Business Success

The “New Networking” is here. In 2019 and beyond people cannot expect that what worked 15 years ago is still how to win business and building relationships today.  The world is a complicated place, but those who excel are still the ones who cultivate human-to-human connections. 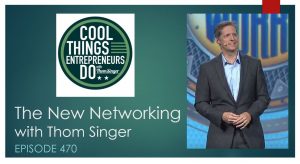 Thom Singer wrote his first book, “Some Assembly Required: How to make, grow, and keep your business relationships” in 2005. The book sold well and helped him launch a successful speaking career. It was all about how to network for business success.  But that was then and this is now. Is there “new networking” skills that people should know now?

Since he wrote that book world has changed (thus the reason to explore the “new networking” idea). Facebook and LinkedIn barely existed in 2005. YouTube was founded the same year. Twitter as still a year from its release, and Instagram was 5 years away. Since the book came out, networking for business has changed.

The more things have changed, the more many things have stayed the same. The new networking is not that different from what the smartest people have always done (but yes, there are changes).

In episode 470 of “Cool Things Entrepreneurs Do” Thom Singer talks about how he has revisited his views on networking and building relationships. The tools that exist today have changed the game. This has caused him to rewirte and retool all his speeches to be relevant in 2019 and beyond.  And the conference participants are more excited than ever to learn about how to make meaningful connections.  “The New Networking” is all about finding more success and fun in business and life.

Much of his message is the same. People are still people and we get opportunities from other humans, not from likes or links. As a result, diving deep into how to stand out in a world full of noise is very important.

Listen to this episode and hear his review of his original book, and the 5 key points on “the new networking” that matter now, For instance:

1. Be relevant in your community – Ger involved.
2. Its not about numbers, the quality relationships are where the opportunities come from over time.
3. You are always being watched and reviewed. You are always “on”, as people can find information about you in all areas of your life.
4. Choose people. There are times to put the electronics down and engage.
5. There is not online networking and face-to-face networking. There is only “Networking”. The new networking combines it all as one.

Thom Singer is a keynote speaker and master of ceremonies / EmCee. He regularly speaks to association and company audiences on how to make stronger connections and reach potential. His keynote “The New Networking” sets the tone for the better conference experiences.