Career in Comedy with Rik Roberts 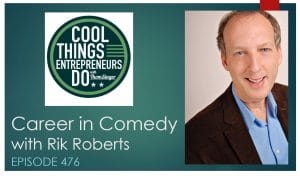 Rik Roberts is a Nashville, TN based comedian and speaker who focuses on providing 100% clean comedy and creative keynotes to groups who need a fun and engaging program.

Most recently seen on Pure Flix Comedy All-Stars, Rik Roberts keeps his humor relevant and easy to relate to. As a father of two young kids, he has found there are enough real life situations that we can all laugh at without going “below the belt”. Family friendly comedy is his specialty. Crafting comedy club level funny along with church clean content, his programs are a good fit for corporate groups, fund raising events, awards ceremonies and faith based events.

His emphasis on storytelling paved the way towards his speaking career. Just like in comedy, Rik keeps the pace of his keynote programs up using stories, facts, current events, visuals and crowd participation to make the points relevant to each group.

Rik Roberts grew up in Kentucky working alongside his father on tobacco farms. Later, he also logged in several Summers on thoroughbred horse farms in and around Lexington, KY. He draws upon these experiences along with the rural way of life in his programs.

A huge Andy Griffith Show fan, Rik developed a “Mayberry Method” approach to his business. After seeing increases of 34% in his first year after implementing the program, he decided to share the process with others in a keynote program of the same name. His slight resemblance to the bumbling deputy comes in handy when he takes the stage as Barney Fife.

Rik Roberts met his wife at a comedy club in 1998 and they have been married since 2002. He spends his time off stage writing songs – many of which are aired daily on SiriusXM radio’s LaughUSA and Jeff & Larry’s Comedy Round Up channels.

Rik is a member of the National Speakers Association and is the current President of the Christian Comedy Association.

Aside from his keynotes and comedy shows, Rik Roberts teaches comedy writing workshops across the country and online through his “School of Laughs”. He also releases bi-monthly episodes of the School Of Laughs Podcast.

Thom Singer is the host of the Cool Things Entrepreneurs Do podcast and the author of 12 books.  He is the a business motivational speaker and professional master of ceremonies / emcee.