Sonny Melendrez – A Lifetime in Radio 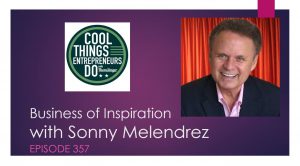 Sonny Melendrez is in the business of inspiration! Inspiring others has always been an important element in the life of this dynamic radio and television personality, author and motivational speaker. Twice named Billboard Magazine’s “National Radio Personality of the Year,” his enthusiasm for life is evident as host of local and national radio and television programs. He was presented the National Hispanic Radio Personality of the Year Award by Ricardo Montalban, then president of the National Nosotros Organization. In 2003, he was inducted into the Texas Radio Hall Of Fame and is included in the Rock & Roll Hall of Fame as one of the Top 100 Radio Personalities of All-Time.

Melendrez has entertained morning drive audiences at some of America’s greatest radio stations, including KIIS, KMPC, KFI, KMGG, and KRLA in Los Angeles and KTSA, KTFM, KSMG, KLUP and KAHL in San Antonio.

Sonny is equally comfortable behind a microphone and in front of a camera, serving as media spokesperson for companies like Disney, McDonald’s and Sprint.

As a motivational speaker and master of ceremonies, he has presented at such prestigious events as the White House Hispanic Heritage Awards; the National “Just Say No to Drugs” Rally at the Washington Monument; and the USO 50th Anniversary Gala at the Ambassador’s Palace in Paris, France with guest of honor, the late Princess Grace of Monaco.

As star of the award-winning children’s television series, ‘You and Me, Kid!” on the Disney Channel, Sonny enjoyed one of the longest runs in the network’s history.

Sonny’s ability and willingness to rally people behind a cause is one reason he is involved in so many charities, both locally and nationally. In 1992, he was named Inc. Magazine’s “Socially Responsible Entrepreneur of the Year” and awarded the “2000 Marketing Philanthropist Lifetime Achievement Award” by the Sales and Marketing Executives of San Antonio.

In 1979, as the Los Angeles commissioner of the United Nation’s Year of the Child, Melendrez was invited to Washington, D.C. to present his idea for a national children’s holiday. Sunshine Day was officially proclaimed and celebrated in all 50 states on August 19th of that year, encouraging parents to spend the day with their children, giving them what they most want and need: time and love.

President Ronald Reagan commended Sonny for his efforts in the war on drugs and he received the National Director’s Community Leadership Award by FBI Director, William S. Sessions. The Department of Justice lauded Melendrez with the prestigious “Modern Hero Award” for his efforts to inspire the nation’s youth to “Soar In School”. In 1990, in recognition of raising tens of thousands of dollars for youth scholarships, he was named “El Rey Feo” (The People’s King) and presided over San Antonio’s annual weeklong Fiesta celebration.

The City of San Antonio named the Sonny Melendrez Community Center located on the city’s West Side in his honor as way to say “thank you” for his community involvement, benefitting disadvantaged youth and families, including over 1400 motivational school presentations. Programs that benefit children have always been a priority for Sonny Melendrez. One of the projects of which he is most proud is The Children of the World Project, giving talented youth and countless volunteers a way to give back by recording the children’s version of “We Are The World,” which he created in Los Angeles in 1985. Over 1500 children participated in the recording and video with proceeds from record sales benefitting USA for Africa. Sonny received a Grammy nomination for “Best Children’s Recording.”

There is hardly a charity or cause in San Antonio and many nationally, that has not received a helping hand from Sonny Melendrez. It is estimated that he has been responsible for raising over 100 million dollars in cash, goods and services for local and national non-profits during his career!.

A man of a thousand voices, he provided the voices of several characters in Hanna-Barbera’s “Jetsons” cartoon series; created many of the sounds heard in the Gremlins Movie; played opposite Walter Mathau as the voice of Bob Cratchet in the animated TV classic, “The Stingiest Man in Town”; and was even the voice of the infamous Fred the Cockatoo in the 70″s NBC TV series, Baretta. He was chosen from a field of over 140,000 as the new voice of the Parkay Margarine Talking Tub, and after a nationwide search, Sonny was picked as voice of Jerry Seinfeld for a campaign promoting the Bee Movie Game for ActiVision.

Conferences, universities, school districts and corporate groups of all types have been inspired by Sonny’s captivating motivational presentations. His topics are designed to fire up audiences to reach their full potential through the power of enthusiasm! In his book, “The Art of Living with Enthusiasm!” Sonny shares the secret benefits to be found in positive living through his personal and powerful stories of encouragement and perseverance.