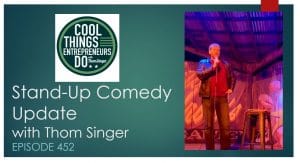 Thom Singer showed up at a comedy open mic night in March 2018 (at age 51). Nervous as hell, he had no idea what he was getting himself into. A friend, who is a comic, pushed him to give stand up a try. He had no idea that this would have such a big impact on his business and his life.  In this episode Thom gives an stand-up comedy update. His journey is still in the early stages, but the learning is real.

When he was younger Thom had wanted to do stand up, but never had the guts to try it. He chickened out and never took the leap. But in his 50s his motto is “Try New Things”, so when invited to accompany Drew Tarvin to an open mic in New York City, he said YES.

He was not great (but he did not bomb). For a first time doing stand up comedy he was actually good.  People laughed.  He had fun, and had a feeling of pride for even trying. This night was a solid push out of his comfort zone. Thus he decided to keep with it. He committed to doing 100 open mic nights to see what he would learn.

He is now at 50 open mics, and has performed in two comedy shows (was even paid once). He is hearing from more comics that he can be in other showcases.  He is putting together a writers group of other new comics in Austin (if he can find a committed group to meet and help each other).

But more than the comedy, the experience is teaching Thom about business and life. The learning is huge. He is actively observing others and seeing who is serious about the craft and watching for the similarities in their actions.

Comedy is the hardest use of the spoken word. With over 800 professional speeches and 452 podcast episodes, Thom is not shy about being in front of people. He talks for a living. But doing stand up has been hard. And he has bombed a few times. Yet the sound of crickets at an open mic has inspired him to figure out how to fine tune his writing.

But how is spending time with comics is teaching him things about business?  In this episode he talks about four of those things:

1. Work hard. The comics that make it work hard. They do not half-ass even an open mic night. They put in the time to ensure they are prepared and they treat their comedy as a real job.

2. Craft the details. The success is in the small things. The best comics will work on fine tuning a joke time after time. They realize that good enough is not the answer.

3. Never say die. 100% of the people who quit never make it to the top. If you want to succeed you keep going.

4. Try New Things. This is Thom’s life motto. He sees it in the best comics. They try new jokes and new ways to tell them. If you are not satisfied with your results, change your actions.

Check out episode 452 of “Cool Things Entrepreneurs Do” to hear Thom Singer share his stand-up comedy update.  Subscribe to the podcast on iTunes or wherever you get your podcasts.

Thom Singer is a keynote speaker and professional master of ceremonies / emcee. www.ThomSinger.com