The American Dream is NOT Dead 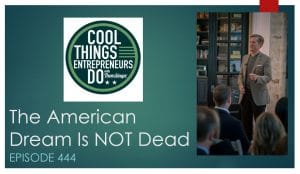 “The American Dream is dead” were the words said to me by a 50-year-old entrepreneur in talking about Millennials and Generation Z.  Thom Singer disagreed. In episode 444 or the “Cool Things Entrepreneurs Do” podcast Thom shares his opinions of what potential lies ahead for business professionals of all ages.
Thom chose this topic to speak about on this episode because of three conversations he had in the past week about the economy, income inequality, and the great recession. While there may be a recession coming, it is not the end of the world. We have had a depression and many recessions in the past. The one consistency is all of these dips have been followed by economic growth.
Thom launched his full-time business as a motivational speaker on April 1, 2009.  He had just been laid off from his corporate marking job, and his prospects for long term employment were bleak. While many might have thought that was an impossible time to start a business, Thom had no choice.  Over the next few years his business grew year over year.

What Other Are Saying

A Google search for American Dream showed a vast majority of negative articles. Many writers have the belief that the American Dream is dead, and there is not hope for the Middle Class in the United States.
Some seemed to think at there is no income mobility for the average person, and that only rich people will get ahead in the future.  This episode deals the the reality that there will be people who overcome the odds and start businesses in the next few years who grow them to amazing heights. There will be intergenerational mobility for those who started in poverty who will out-earn their parents. Thus, why not you?  If it will happen for some, Thom thinks you need to believe it can happen… and take actions accordingly.

Maybe Thom Singer is a Pollyanna.  Maybe he is too optimistic. But he lovers the famous quote from Henry Ford; “Whether you think you can, or you think you can’t…you are right.
He is not saying it isn’t hard. His own career is really difficult to keep moving forward. He has made less money over the last decade than he might have earned in a salaried corporate job. And he realizes that some people have privilege and others have more obstacles.  Yet he is obsessed with “potential” and believes we all have the chance to create a new path in the world.
Those who find success are not just lucky. They take risks and work hard. Most successful entrepreneurs have failed at least once. The American Dream is not dead. But it is not easy.  Everyone has issues in their life that can hold them back, but many people can work around those roadblocks.

Your Potential in Any Economy

Thom talks about his ten tips to reach potential in the end of the episode:
Check out episode 444 and decide for yourself if the American Dream is dead (No, it is not).

Most of those who have mentioned this episode to me were positive. The entrepreneur community, and those with a desire to start a business, seem to believe the American Dream is alive, and see that all humans have potential. I got a few cool notes from people who were pleased that I did this episode.  However, a few people attacked me. They pointed to my privilege and said others the American Dream is dead.

I choose to believe that everyone can achieve great things.

Thom Singer is the host of the “Cool Things Entrepreneurs Do” podcast.  He is also a funny keynote speaker and master of ceremonies (and the author of 12 books).