The End of New Year’s Resolutions 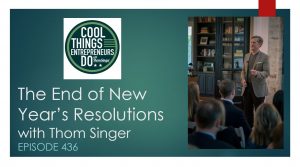 Most surveys show that the New Year’s Resolutions we set are abandoned by the end of February.  People set goals, and then the routines of their life set in and we fall into the same path we have been walking for a long time.
Thom Singer believes in goal setting and New Year’s Resolutions.  While he knows that most people never do much with working long toward their goals, for those who do, it can be magical.  But it is not about reaching to goal, the success in in the progress you make along the way.
As humans, we like the idea of a “fresh start”.  This is why birthdays, anniversaries, and New Year’s Day are such a big deal.  We get to move ahead with a new path. We get excited about that potential, but potential is not a solution.  Potential does not equal results. The key here is “performance”.
In observing peak performers, Thom Singer has seen a pattern. There are things people do who reach come closer to reaching their potential, than those who are stuck in a rut (Thom believes that you never really reach your potential, as once you climb a mountain you find bigger mountains to climb).  Peak performers keep trying and they enjoy the journey.
Peak performers take action.  Many people feel they are coming up short, and those are often the same people doing the same routine day after day. Those who are achieving more are not static in their actions.

What Peak Performers Do:

Check out episode 436 of the “Cool Things Entrepreneurs Do” podcast.  If you like this episode, please share it on social media or with your friends.