Try Something New In Your Business

Get Creative and Try New Things

Do you ever feel like your whole world is stuck in a loop of the same old things? If you want to get out of that rut you have to try something new in your business (and life).  This episode of “Cool Things Entrepreneurs Do” is about the story of three associations who decided to shake up their events with new formats, and got really good results.  But this is NOT just for meeting planners.  Regardless of your industry, you will want to hear episode 432. 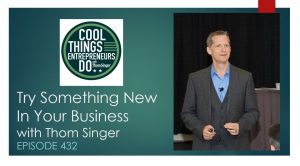 The same efforts and same agenda will not produce new results. Thom Singer, professional keynote speaker, shares the message of “Try New Things” in his popular Paradox of Potential workshops and keynotes.  He speaks to dozens of groups each year, and this part of his message has become the part of this presentation that people talk about for months after the event. He believes when you try something new, you open up unlimited opportunities.

No matter what industry you work in, it is reasonable that you, your employees, your products and services, your vendors, and your customers are all caught up in the same routines. We like systems, and the familiar – but too much of the same-old-same-old leads to being stuck.

It happens in all industries. Thom Singer wrote an article for the February 2019 “Meeting Professionals Magazine” (titled Making Attendees the Star on the blog and TRY NEW THINGS in the print version onpage 30) about how one of his clients totally re-thought their opening general session.

For decades this group, like most associations, had an opening business session that included a famous keynote speaker. But in 2018 they wanted to try something new. No Keynote Speaker for their general session. (What? YIKES….As a keynote speaker himself, Thom does not advocate for killing off the keynote! Ha).

Instead, they wanted to try something new. The goal was to make their members the star of their conventions.  Shaking up the standard agenda and not having a keynote might have seemed like a weird idea, but the best event planners always are willing to go out on a limb.

They created a 2 1/2 hours general session that focused on the brilliance of their members, sponsors, and other industry VIPs. They hired Thom Singer to help facilitate the session, and got hundreds of people to engage and share best practices instead of sitting by and listening.

It was an interactive session where everyone participated in small groups to answer some of the most pressing questions facing their industry.  Then the best ideas were shared with the whole room (as Thom ran around with the microphone as if he was the modern day Phil Donahue).

It was a huge success, but it was not without risk. They had to get buy-in from the attendees in advance to ensure that all stakeholders were on the same page. If it had not worked out, they needed people to be positive about the concept of  an attempt to try something new.

When you try something new you have to be sure you are okay with some level of failure.

Thom also shares in this episode two other clients who wanted to shake up their conference with new experience driven ideas. One produced a morning game show (think “Let’s Make a Deal” meets “Jeopardy”) with the intention of getting people fired up about the opening session and to encourage the early arrivals to sit up in the front of the room.  The hosting association provided nice prizes, but you had to be sitting in the front of the giant arena to be eligible to win something.

Another client asked Thom to write his keynote the night before the event based on the input from the meeting participants over the first two days of the event. Thom was going to be the closing keynote speaker, but he was also serving as the master of ceremonies for the whole conference. Over on the second day he let the attendees know they were writing the closing keynote, and collected ideas related to his general topic.  On the last day he presented a speech that had been crafted by the conference attendees. They loved it.

But this episode is not just about the meetings industry. Everyone should be looking for ways to have more experiential interactions with customers, prospects, vendors, employees, etc…..

If you know that you should try something new, listen to this episode.  Be open to the ideas and seek inspiration.

Will you go try something new today!