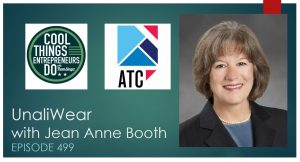 Episode 499 of “Cool Things Entrepreneurs Do” is co-produced in partnership with the Austin Technology Council, the largest tech industry organization in Central Texas. ATC empowers members by using insights, resources, and connections so their members can succeed and thrive. This conversation is with long-time ATC member (back to the days when it was the Austin Software Council) Jean Anne Booth – CEO and Founder of UnaliWear.
In this episode Jean Anne talks to Cool Things host, Thom Singer, about business, Austin, and the changes in technology. She shares her story from working at NASA in college, to engineering jobs, to a career as a serial entrepreneur.

Focus groups have named UnaliWear’s Kanega watch a wearable “OnStar for People” because they provide discreet support for falls, medication reminders, and a guard against wandering in a classically-styled watch featuring an easy-to-use speech interface rather than buttons.
Thanks to UnaliWear’s patented battery system in the band, you never have to take your watch off to charge – and unlike Apple watch or Samsung Gear, they don’t require a smart phone (because it’s built in). We combine cellular, Wi-Fi, GPS, BLE (for hearing aids and telemedicine devices), an accelerometer for automatic fall detection, and continuous speech to provide an active medical alert that works anywhere, along with data-driven artificial intelligence that learns the wearer’s lifestyle (think “NEST for people”) to provide predictive, pre-emptive support.
Their naming derives from Cherokee: “Unalii” is “friend”, and “Kanega” is “speak”, so they are the friend that speaks to you.
OnStar is a registered trademark of OnStar, LLC. UnaliWear has no affiliation with OnStar.

A serial entrepreneur, Jean Anne Booth started UnaliWear after selling prevUious startups to Texas Instruments and Apple.
Jean Anne was the founder of Luminary Micro, the creators of the Stellaris microcontroller platform and the first to market with ARM Cortex-M3-based microcontroller solutions.  Luminary Micro was purchased by Texas Instruments in May 2009, and was one of the top VC-backed M&As of 2009.  Jean Anne retired from TI in 2012 after serving as the general manager for TI’s Stellaris family of products.
Jean Anne was also a founder at Intrinsity, the creators of the graphics chip in Apple iPad products.  Intrinsity sold to Apple in 2010.
Jean Anne holds a BSEE from the University of Texas at Austin, and an MSCE from National Technical University.

Thom Singer is the host of the Cool Things Entrepreneurs Do podcast. He regularly speaks to company audiences about how to help individuals and the whole team navigate the gap between potential and performance. He is a keynote speaker and professional master of ceremonies.  Thom is a TEDx Speaker, Vistage Speaker, and eight time SXSW Speaker.