Candid and informative podcast interview with Yancey Strickler (Co-founder of Kickstarter). Episode 475 of the Cool Things Entrepreneurs Do podcast.  Subscribe to this podcast on Apple Podcasts, iTunes, Stitcher, Spotify, etc…  and never miss any of the insightful interviews. 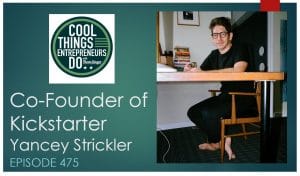 Check out episode 475 of “Cool Things Entrepreneurs Do”.  Podcast host Thom Singer interviews Yancey Strickler about his journey from small farm town to being the co-founder of Kickstarter.  Thom met Yancey at a conference where they were both speakers, and was instantly impressed with his world view and cool personal demeanor.  When Thom asked “will you be on my podcast”, he was thrilled that Yancey responded “yes” instantly.  This is a great interview and Strickler shares very useful insights for all entrepreneurs.

Yancey Strickler is a writer and entrepreneur. He is the cofounder and former CEO of Kickstarter and the author of This Could Be Our Future: A Manifesto for a More Generous World, coming October 29, 2019 through Viking Press.
Yancey has been recognized as a Young Global Leader by the World Economic Forum and one of Fast Company‘s Most Creative People. He’s a former music journalist whose writing has appeared in Pitchfork, theVillage Voice, and New York Magazine. He’s spoken at the Museum of Modern Art, Tribeca and Sundance Film Festivals, Web Summit, and events around the globe. He’s cofounder of the creative resource The Creative Independent, the record label eMusic Selects, and an app that lets fans announce NBA games called Micd. The London Spectator called him “one of the least obnoxious tech evangelists ever.”
Learn more about Yancey Strickler and his new book at https://www.ystrickler.com

Thom Singer is the host of the “Cool Things Entrepreneurs Do” podcast.  He is an experienced keynote speaker and professional master of ceremonies / emcee.  He speaks regularly at company meetings and association conferences.