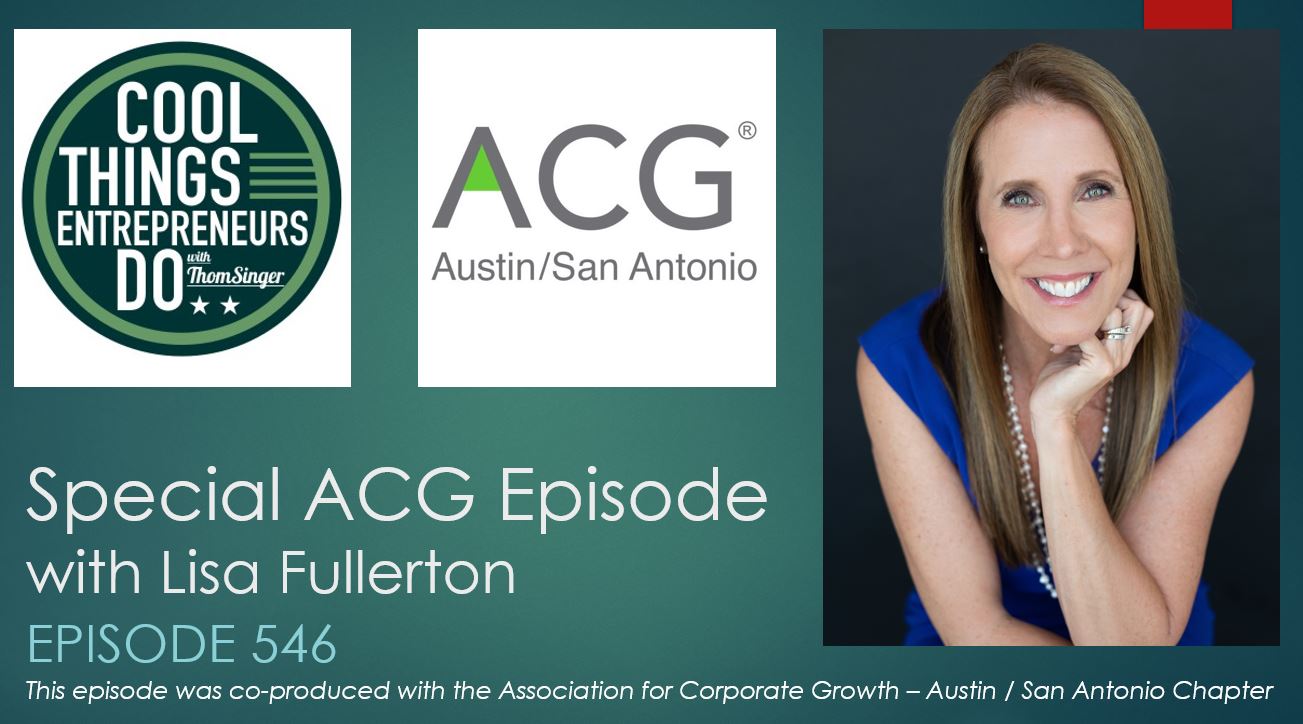 The speaker for the March 31st Association for Corporate Growth luncheon in San Antonio was to be Lisa Fullerton, President and CEO of A Novel Idea.  Because of the COVID-19 situation, ACG Austin/San Antonio had to cancel their live events for the short term, but they wanted to ensure they could still provide content to their members and extended community.
.
Lisa runs a successful business of five Auntie Anne’s Pretzel stores and one co-branded Cinnabon franchise in San Antonio.  Her original presentation at the ACG lunch was going to be about growth and longevity of her quick-serve restaurants in an industry with typical employee turnover at 200 percent.  She has kept going in the high-stress, high-burnout food service industry, and been in business 20 years, when the average life span of a quick-serve restaurant is 8.5 years.  She’s increased sales by 900 percent and staffing by 1,000 percent since opening her first store, and she’s also gotten involved in small business advocacy at the local, state, and federal levels.
.
This interview discusses all of the above, but Lisa is also candid about the current economic situation and her need to stop operations in most locations in the face of the pandemic.
.
ACG Austin/San Antonio is grateful to Lisa for taking the time to do this interview.  Her support of the business community in San Antonio, Texas, the US, and the world is very clear in the message she shares.  ACG ASA looks forward to having her speak in-person at a future event, but in the meantime, please enjoy this podcast interview.
.
***Disclosure:  Thom Singer, host of “Cool Things Entrepreneurs Do” is the husband of Sara Singer, the Chapter Executive of the ACG Austin/San Antonio Chapter.
.

.
Lisa Fullerton is the President and CEO of A Novel Idea, LLC (A.N.I) which operates 5 Auntie Anne’s Pretzels and 1 Co-branded Cinnabon Franchise in San Antonio, Texas.  Since opening the first store in 2000, sales have increased 900 percent and staffing has increased 1000 percent. Employee turnover is 200% in the high stress, high-burnout food service industry, and the average life span of a Quick-serve restaurant is 8.5 years.  Lisa is proud of the company’s 20-year history despite these odds.  As a result of increasingly unpredictable regulation and legislation, Lisa has started to advocate for small business at the local, state and federal levels in recent years.  During the 2017 Biennial session, Lisa worked with a US Congressman and State Representative on a bill to restrict state regulatory bills.  HB1290 was one of only 17% of the bills written that session, signed into law by the Texas State Governor.  During 2018, Lisa successfully fought against a Labor Peace Agreement that would have allowed labor unions to organize airport concessionaire employees.   During 2019, she was an outspoken opponent of Mandatory Paid Sick leave at the municipal level and testified repeatedly in the Texas House and Senate committee meetings.  She was also appointed by San Antonio’s Mayor Nirenberg to a Paid Sick Leave (PSL) task force representing the business perspective.  To stay abreast of potential legislation or regulations that can harm small business, Lisa serves on the NFIB Texas leadership council, is Public Policy Chair for NAWBO and a Director for the North San Antonio Chamber of Commerce.
.

ACG Austin/San Antonio would like to thank their annual sponsors:

.
Thom Singer is a keynote speaker and professional master of ceremonies / EmCee
.
After a successful career in sales and marketing, Thom Singer became a growth leadership speaker in 2009. A decade later he has brought his high energy presentations and action-oriented content to over 900 audiences. Thom knows that as the speaker or master of ceremonies he has a responsibility to set the tone for a strong conference attendee experience. Known as “The Conference Catalyst” he creates an atmosphere of fun and interaction that lasts beyond his presentation.
.
Thom earned his Certified Speaking Professional (CSP) in 2014 and is committed to the business of meetings. He is the author of 12 books and is the host of the popular “Cool Things Entrepreneurs Do” podcast. On his show he has interviewed over 400 entrepreneurs, solopreneurs, business leaders and others with a focus on discovering how the most successful people get farther across the gap between potential and results.
.
At 50 years old Thom decided to reinvent his life and make age 50 to 75 the best years of his life. This meant saying yes to things that scared him, and trying new things. Since that time Thom has jumped off buildings, took up running (and lost 30 lbs) and began performing stand up comedy.