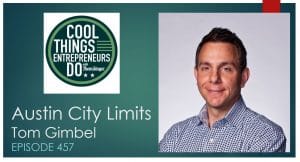 Tom Gimbel is the General Manager of the KLRU television show – Austin City Limits.  Austin City Limits is the longest running music show in American television history, the only television program ever awarded the National Medal of the Arts, a certified Rock and Roll Hall of Fame Landmark, and in 2012 the recipient of an institutional Peabody Award celebrating “37 years of excellence in television.”

As an artist manager, he has represented the legendary underground musician and artist Daniel Johnston for more than 20 years.

In 2017, Gimbel and Courtney Blanton co-founded the Hi How Are You Foundation – a Non-Profit organization dedicated to removing the stigma and encouraging open conversation around mental health issues.

Hi, How Are You Project – https://www.hihowareyou.org/

Thom Singer is a business motivational speaker and professional master of ceremonies / EmCee.  He works with companies and associations to get their people focused on the gap between potential and performance. Thom is the author of 12 books and the host of the “Cool Things Entrepreneurs Do” podcast.