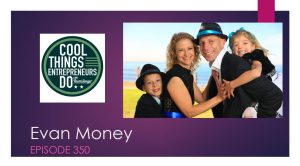 Evan Money is a Happily Married, #1 Bestselling Author, Ph.D. & Global Entrepreneur. Evan and his bride remarry in a different state or country every year and are celebrating wedding #23. They home school their two amazing children and live in majestic Rancho Palos Verdes, a quiet enclave in Los Angeles. Evan has been interviewed by and featured on ABC, NBC, CBS, The Wall Street Journal, SUCCESS & Fast Company magazine.
Evan also co-wrote and produced the ground-breaking documentary “Words of Art” starring Joel Osteen, Darren Hardy, Zig Ziglar, Jim Rohn, Dennis Waitley and more, available on Amazon Prime. Evan is the #1 source for faith based personal growth for entrepreneurs.
Evan and his bride both came from normal dysfunctional families, raise your hand if you can relate?
When they first got married their starry-eyed quest was to live happily ever after and bring each other’s dreams to life. The challenge was, they had no money. His bride had a low paying high stress job and he had a struggling business.  They drove junky cars and lived in a postage stamp sized rental house. On top of that, he had major sexual baggage from a dark past that he is unpacking today.
In-spite of all this they decided to dream big, they set a goal to get remarried in a different state or country every year.  With lots of prayer, action and creativity, they have been married 23 times, and yes they have had 23 honeymoons!  Their story has been featured in media outlets around the world, but this is just the beginning of their story?
Along their journey as husband and wife and now mom and dad, they realized that in order for things to get better, they had to get better and in order for things to grow (like the marriage and their finances) they had to grow. This meant they had to stop blaming everyone else, like the government, the traffic & the economy and start taking full responsibility for their lives.
So they began their journey of spiritual and personal growth that continues to this day. Their mission is to bring your dreams to life, because the world needs more people living their dreams.
If you have a film that needs financing we can help, along with P&A money.
Need cash for your new business or a growth loan? – they have your back.
Looking for a one of a kind speaker that will re-kindle your audiences’ dreams and spur massive growth? – Evan Money is at your service.
It’s time to re-kindle your own God given dreams.
Take Action and the world is yours.
http://www.EvanMoney.com