On episode 539 Thom Singer sits down and eats amazing barbeque with one of the owners of LeRoy and Lewis.  Saywer Lewis shares her entrepreneur journey as Thom eats, and eats, and eats.  No matter where you live, you know that Austin is famous for two foods, Tacos and BBQ.  Today we talk BBQ (but it is such a great interview, Thom will soon be seeking a Taco Entrepreneur to be on the show). 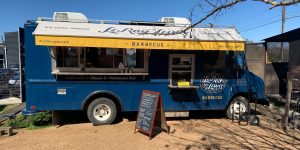 Sawyer Lewis is an entrepreneur, and the co-owner and operations manager of LeRoy and Lewis BBQ, specializing in hospitality, event planning, social media, and business development. At the age of 18, Sawyer moved to Austin to attend the University of Texas, where she fell in love with the community while working in local restaurants.  Her passion for the restaurant industry has been cultivated over the last 15 years by working with award-winning chefs and entrepreneurs, and learning from key figures in the sustainable farm-to-table movement across the country. After traveling throughout America and Europe, seeking out various regional cuisine and beverage, Sawyer and her husband Nathan Lewis moved back to Austin in 2015 to settle down.  In 2017, Sawyer and Nathan joined forces with Evan and Lindsey LeRoy to open LeRoy and Lewis BBQ truck at Cosmic Coffee and Beer, with plans to expand into a brick and mortar restaurant and brewery and launch a line of consumer packaged goods. In 2019, Sawyer helped to start an Austin Chapter of I’ll Have What She’s Having, a non-profit uniting hospitality professionals to raise funds and awareness for female health care.

About LeRoy and Lewis