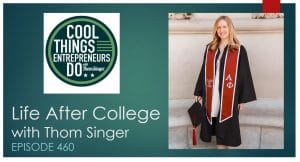 Life After College – Tell someone you know under 30 to listen to this episode of the “Cool Things Entrepreneurs Do” podcast.

This week Thom Singer was in Pittsburgh to see his daughter graduate from college. As he looked into the crowd of over 1000 students he wondered about their life after college. He knew that many of them were destined to put their ladder against the wrong wall. Too many will chase a career for the money, prestige, or because it is what they think their parents want them to do. As they go into their life after college, Thom hoped they could hear the words he never heard: “It is okay to carve your own way in the world”

In episode 460 Thom Singer talks about what he wants for his daughters, and everyone under 30. That is to know that when they figure out what they really want (not just money or titles, but the whole package of life), then it becomes easier to make choices.

As we transition into the real world, most people hope they will find their dream job. But at 50 years old, Thom knows that few people end up in the dream job. In all of life after college, he only twice had jobs that were amazing. The rest were okay or they were crap. When in a job search it is common that we move and take a job because we need a job.

In this podcast episode Thom addresses that you need not worry about your parents, friends, or what those on social media will think about you if you carve your own path. While you still need money to pay the bills. Moving home to save money is one thing, but having your parents pay your rent and food is not taking control of your own life. However, the only answer is not full time jobs. You can start your own business and work part time. There are many ways to piece together your life. If you are doing this in a way to meet your soul’s goal, you will never be sorry you tried. Even if you fail, now is the time to fail since you do not have many responsibilities.

Yes, you might have student loans, but that means you have to work hard and skip things like new cars and trips for a while. One young person complained at that advice that it seemed hard. Yep. Life after college is hard. It will be hard now and later.

Read Thom’s blog post on this topic at https://thomsinger.com/blog/what-to-do-after-graduating-college/

***Update:  Someone I know, hearing my kid graduated with a business degree from a prestigious university told me I should “make her” take a corporate job for a few years. The point was we invested too much money for her to start a fitness training company and work for small companies.  Her earning potential in the Fortune 500 or a bank would be higher.  Esentially they were saying that because we invested a lot of money (and are carrying debt because we chose to pay for her education) that she should follow the traditional path.  I fully disagree.  She is an adult who has graduated college. At this point she has to answer to herself and work together with her fiance to create a life. She owes me nothing.

I posted a similar LinkedIn post about how she (and others) should go for their dreams in their life after college.  A person forwarded the post and agreed, adding… He wished people had given him this message when he was young. Instead he went to college and got a job.  When he finally followed his heart, the people around him said he was “going rogue”.  NO, NO, NO…that is not going rogue. That is being true to yourself.  – Thom.

***********************
Thom Singer is a plenary speaker and event emcee. He is the host of the Cool Things Entrepreneurs Do podcast and the author of twelve books. He speaks regularly to company and association audiences.