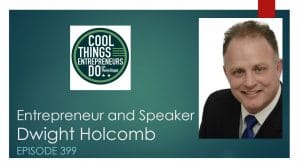 Dwight Holcomb is a Member of the Forbes Business Council and the host of the business television show, “SaaS CEO Success TV”.  The show is set to air on the C-Suite TV Network which has global distribution in over 59 million households and more than 90 million views per month.

Dwight is the CEO of HC Development, providing MaaS CMO™ , Marketing as a Service with Executive oversight to the Software & Technology industry.  Dwight speaks Internationally as a Technology Futurist and on the topic of Sales & Marketing Innovation.

The Author of “The Lean CMO” and a serial entrepreneur, Dwight launched several start-up companies in very diverse industries.  He is the founding CEO of LifePet Organic, iBuyBaby.com and Millennium Entertainment, earning executive producing credit and pilot work with Robert Downey, Jr., Jon Lovitz and Russell Peters.  Committed to helping other executives to excel in business, Dwight sits on the Board of several privately held companies and is a founding member of the UCLA Anderson CEO Forum.

Earning an MBA from both UCLA Anderson School of Management and The National University of Singapore Business School, Dwight is a graduate of the UCLA-NUS Global Executive MBA program, ranked #3 in the world by the Economist.  He currently serves as President for the UCLA Anderson Alumni Network Board of Directors and is an Executive Committee Board Member for the Muscular Dystrophy Association (MDA).

Dwight is an avid wakeboarder & snow skier and enjoys traveling with his wife and two children.