Olympian to Entrepreneur with Brent Hayden 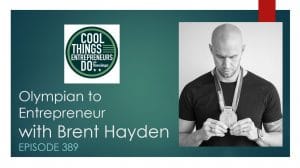 Brent Hayden is a former international swimmer from Canada. Hayden was a bronze medal winner in the 100m freestyle at the 2012 Summer Olympics in London. He was co-World Champion in the same event in 2007 with Filippo Magnini of Italy. By winning the 100m, Hayden became the first Canadian in 21 years to win a gold medal at the World Aquatic Championships. He was also the first Canadian to appear in the 100m final at the Olympics since Dick Pound at the 1960 Summer Olympics and the first Canadian to win an Olympic medal in the 100m. Hayden adds a further 3 silver and 1 bronze medal to his World Championship totals. He is the current reigning Commonwealth Games champion in both the 50m and 100m freestyle events. In addition, Hayden is currently the Canadian record holder in the 200m, 100m and 50m freestyle in both the short-course and long-course. He is also a former World Record Holder in the 4×100m medley relay, and the 4×200m freestyle relay.
Brent continues to live in Vancouver with his wife Nadina Zarifeh helping her pursue her music career. She signed with Nettwerk Records and released her debut album “In The Now” in 2012. Together, they have launched “Brent Hayden Swim Camps” and continue to coach privately together. They ar also the founders of an athletic clothing brand, Astra Athletica. Brent has also come off of two successful solo art exhibitions for his photography, the first titled “Nothing Witty” at the Mission Arts Centre in his hometown, and the second at the Cassera – Foot Of Main Gallery in Vancouver.
In this episode of Cool Things Entrepreneurs Do he shares the similarities in the efforts to win as an athlete and to win in business.  We cover a lot of ground about his newest venture, Astera Athletica. Astra Athletica is emerging as the premier performance and athletic lifestyle brand for the never stop active person. When you wear Astra Athletica, you are joining a community of individuals who never let a challenge stand in their way.
“My greatest successes came from overcoming my greatest challenges.” -Brent Hayden, OLY
https://www.astraathletica.com/
http://www.brenthayden.com