[UPDATE- This mic is no longer happening.  Check out TUESDAY NIGHT at the Spokesman on St. Elmo for a great comedy open mic]

Wednesday Night Austin: Comedy Open Mic Night Austin, Texas –  What is there to do on a Wednesday Night in Austin?  The Texas capital city is a town with many fun activities. US News named it one of the top ten cities for millennials, and the most fun metro area in Texas. Seven days a week you can discover fun things to do.  And now, starting July 10, 2019, there is a new comedy open mic in Austin every Wednesday night.  “The Profile Open Mic at Stereotype“.  8:30 PM – 10:30 PM. (open mic list at 8:00. List will be reordered).

Produced by Rough Cut Comedy LLC and hosted by Thom Singer, this mic is setting out from the start to be a little different. Part open mic, but with a twist. Each week there will be a “Profiled Comic”.  The comedians who show up for open mic (capped at 20 comics) will get five minute sets, and the “Profiled Comic” will perform for ten minutes.  BIgger crowed of comics? We will occasionally run “The Profile After Hours” with 3 minute sets until every gets their stage time.

The show is seeking to draw a regular crowd of locals and out-of-town visitors who want to enjoy a fun atmosphere, support local comics, and laugh out loud. Wednesday nights in Austin at Stereotype is the place for funny.  The best comedy shows and open mics are the ones where the audience is more than just people from the local comedy community.  The Profile is welcoming to all, but the comedians are not censored. It sometimes might be dirty or offensive. Be ready for anything. At this Wednesday Night Austin comedy open mic… who knows what you will see.

Never Been To An Comedy Open Mic Night?

If you have never been to a comedy open mic night, make Wednesdays your night to laugh in Austin. Austin has an great local comedy scene with amazing comedic talent. There are about twenty open mic nights each week in the Austin, all are free to the public. These shows area a great chance to see how the sausage of comedy is made. Headliner and featured comics participate in open mic nights to try new material and fine tune their best jokes. New comics show up to get past the fear of stand up and test their funny bones. Sometimes they bomb, sometimes your sides will hurt from the laughter. Grab your friends and co-workers and head out for a fun night in the West 6th Street Area.

Expectations for “The Profile” Open Mic

For The Audience: There are no real “rules” around open mic night, other than comics are asked to keep to their assigned time frame (5 minute sets) and the audience is asked to be respectful.  Laughing, if the jokes are funny, is appreciated. There is no heckling. An open mic should be a place where comedians are free to try new things. Some will be new to the craft of stand up and we want to support people at all levels of experience in comedy. Oh, support the venue and the staff – order beverages and tip the servers.

For The Open Mic Comedians: Five minute sets and the list is capped at 20 comics. Sign up / list starts at 8:00.  Show at 8:30.  Sticking around and watching a few other comics after your set would be cool, but there are no rules. As this mic takes shape, we hope it will be a good addition to the local comedy community.

For The Profiled Comic: Bring your best ten minutes. Each week we hope to put the profile spotlight on a different local comedian and provide a venue where you can bring your friends to share in your comedy journey. If you want to be on the list of profiled comics talk to the good people at Rouch Cut Comedy. We hope to share this spot with many local and visiting comics.

See You On Wednesday Night Austin

This show is the newest comedy open mic night in Austin as of July 10, 2019. It might take a few weeks to build up an audience and gain a reputation with the local comedy scene. But our hope is that your Wednesday night in Austin will be spent at Stereotype. Come and laugh. 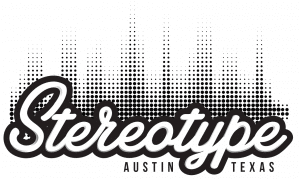