Funny Motivational Speakers set the tone for better events. Laughter is one way that people share experiences, and that builds community. When seeking experienced professional speakers, make sure that they understand the power of humor in making their content more meaningful to conference audiences. 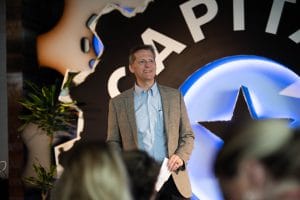 Long before I became a speaker I was a fan of watching funny keynote speakers. A twenty-five year career had me attending a lot of conferences. I must have seen over one thousand keynote speakers before I ever took the stage. Speakers set the tone for successful events and when the speaker is engaging and can get an audience to laugh, they are usually more memorable. A funny motivational speaker is better than a monotone data dump.

Speakers come in all shapes and sizes who over any number of topics:

No matter what content the subject matter expert covers, the level of audience engagement is all over the map. I sat through hundreds of presentations where the room burst into applause when the speaker said “In conclusion”. Even if a speaker is smart, if they bore the audience, the conference suffers.

Nobody wants to sit through a boring speech. Speaking is a learned skill. Not every person who is smart, or has accomplished something cool, should be invited to deliver a presentation.

The one thing that makes all speakers stand out, regardless of their topic, is humor. Funny speakers are always better than dull speakers. I have seen many technical and scientific talks where the expert on stage got everyone to laugh. Most people remember the funny motivational speaker over the ones who are dull.

But humor can be scary and not everyone is naturally funny. Many speakers avoid any use of “funny”.  When I began my career as a speaker I thought I had to prove to everyone that I was smart. I was frightened if I was funny people would think my content was weak. I wanted to come off as a professional. But a speaker who tries to be appear smart usually fails to engage.

My early corporate presentations were all “meat”. I stayed away from trying to do anything that could bring my credibility into question. That meant no joking around.  No playing with the audience. My job was to educate and share ideas, and I was good at my job.

Yet we need humor.  Humans are hungry to laugh. The legendary Zig Ziglar gave this advice to speakers; “Prepare extensively every time… and be funny.”  While doing the work and crafting a great talk is important, without humor the speaker is just average.

Funny Motivational Speakers is a popular search term. Meeting planners want speakers who can not only provide actionable content, but who can engage the audience.  Humor is one of the best ways to interact from the stage.

For years there was a lot of talk in the meeting industry about how speakers need to get people to do an exercise every few minutes, but that suggestion overlooked the fact that laughing is interaction.

My Journey To Find The Funny

Over a decade as a speaker I learned that having strong content and humor are not mutually exclusive.  I worked on learning how to engage an audience, and over time people would comment on my talks being fun.  Eventually I even heard “you are funny”, but I was not sure of what I was doing.

In 2018 I made a conscious effort to learn about the power of humor. I read several books on the subject, but quickly learned you cannot find the funny by reading about it.

I was invited (encouraged?) by a comedian friend to go to a “comedy open mic night” and give stand up a try.

Talk about out of my comfort zone, Yikes. Here I was a person who has delivered over 800 professional speeches, and I was terrified to do five minutes in a comedy club. But the one thing I teach others is to “Try New Things”. To be congruent with myself, I had to follow my own advice.

I joined my comic friend at a comedy club in New York City (yes, my first time doing stand up was in Greenwich Village). I signed up on the list and waited my turn.  Many of the people at the open mic were professional comedians, but some were just starting out. When my turn came I lived through it. I was not super funny, but I got some laughs.

The experience was powerful. While my goal is not to become a hall of fame comedian, I realized that I had a lot to learn from comics. Comedians who find real success are among the hardest working people I have ever met. Established motivational speakers seem to feel they are on top of their game, while comics are always working to improve.

I began to watch comedy specials on NetFlix, and studying the differences and similarities between a comedy show and a corporate conferences. I realize that my clients do not want me to do “bits” on their stage. However they do want their event attendees to be engaged.  My job as a funny motivational speaker is to bridge that gap.

It turns out that stand up comedy is the hardest use of the spoken word.  I have given many talks as a corporate speaker, been in a short film as an actor, took improv classes, and I host a popular podcast. But stand up is not the same. It is hard.  There is no room for failure. People laugh in a comedy club or they do not.

I decided to go to an open mic night every week for the next two years. It took about thirty times before I got funny, but every time I took the stage I learned something new.  Bombing was not fun, but it gave me perspective.

Then came the day when I spoke at an association conference that I had presented at the year before.  After my speech the meeting planner said to me “That was great. Better than last year. What did you do to improve so much?”.  It was my attention to learning about comedy.

There are not jokes in my speech, but my timing and my playfulness with audiences has been transformed through my commitment to learning about humor.

I was recently the EmCee for an industry conference and the closing panel was full of great content, but it was boring. I hit the stage, thanked the panel, and then recapped the whole event with a splash of humor.  The whole mood of the audience shifted and the conference closed with an upbeat tone. The meeting planner was thrilled and told me “keep going to comedy, you are funny and you saved my day’.

Being called a ”Funny Motivational Speaker” early in my career would have left me wondering what that meant about the impact of my message.  I now understand that is the best label anyone could give me, as I would never want to be called the opposite (“Boring Motivational Speaker” is never what we call the people who bomb at conferences, but you get the idea).

Thom Singer is a funny motivational speaker and professional master of ceremonies. If you see an experienced corporate speaker, call (512) 970-0398

Let’s work together if you want a fun and funny motivational speaker.