Consider Keynote Speaker Thom Singer for your next event. 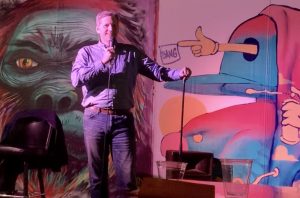 Are you seeking a funny keynote speaker or humorous master of ceremonies / emcee for your next association or company conference? Thom Singer has over ten years experience as a professional speaker. He has delivered over 800 presentations, and is an active participant in the meetings industry. As a speaker he brings experience and humor to every presentation.

Thom Singer is excited about his role as a motivational speaker. He realizes some people roll their eyes at the idea of “motivation”, However, the opposite of motivation is de-motivation (or sucks the energy out of the room), and he is sure that no planner intentionally seeks those adjectives in their speakers. Participants at live events want to learn, be inspired, and have some level of entertainment.

Modern convention audiences want more than a “sage on the stage” who shares their brilliance. The era of an award winning celebrity speaker talking at the crowd is past. People want to be part of the conversation. Interaction is key. Conference participants desire the ability to relate to the speaker as a peer. One way to connect better is through the use of humor. Laughter is interactive.

Looking for a funny motivational speaker who also brings actionable content is key to the success of your next event? In selecting a speaker you do not just want “fluff”.. A humorous keynote is not the same thing as stand up comedy. Your audience needs real learning, but when that comes with a fun delivery style, your event becomes memorable.

Thom Singer is a serious speaker with great style and wit. Throughout his career his audience reviews have always included the word “funny”, but he did not understood the power of laughter in helping create the atmosphere for better corporate and association events.

A CEO at a large association, who had hired Thom Singer to speak at her events three times, challenged him eight months before her trade show to change up part of his presentation. She told him she always enjoyed having him speak, but this year she wanted him to learn to be more interactive and “playful” with the audience. Thom promised to find a way to shake things up, and he enrolled in an improv workshop.

Around the same time he was invited to go to a comedy open mic night with a friend who is a professional stand up comic. Singer, who had delivered hundreds of professional speeches, was scared to try stand up. Yet knowing the promise he made to his client, he jumped in and tried his hand at a 5 minute stand up set. (Yes, his first try at stand up comedy was at a club in New York City – go big or go home!).

Thom’s first experience at comedy was not life changing. Jerry Seinfeld was not worried about job security because some random keynote speaker tried his hand at being funny. On the other hand, Singer became inspired to learn more about the power of comedy and how it helps a speaker connect with an audience.

As a funny keynote speaker he has now embraced stand up as his training ground. He is regularly attending comedy shows and learning from the best comedians. He signs up for an open mic night every week. Learning from comedy has become a deep seeded commitment to bring better presentations to his audiences.

What he has learned is that stand up comedy is the most difficult use of the spoken word. Thom has been a speaker for over a decade. He has been a guest or host on over 600 podcast episodes. There have been acting classes and a role in a short film. He has studied improve. None of this has compared in to the complexity of comedy. Stand up is really difficult. But because is is hard is the exact reason he has committed to learning this craft.

Thom began going to open mic nights every week and trying to learn about how comedians relate to audiences and build rapport quickly. He realized that the people who show up to see comics want them to succeed, but they have high expectations for what is funny. Comics are risk takers every time they take the stage.

Now having participated in over 50 open mic nights, and having been invited to be featured in a few comedy shows, Thom is finding his voice as a funny motivational speaker. Humor is difficult, but discovering how to get people to have more fun is an important part of his job as a speaker.

While Thom Singer never does “stand up” or “jokes” in his role as a motivational keynote speaker. His speeches are now funnier and more engaging. It is not about the comedy, but instead what he has learned about timing, cadence, and how to be playful with an audience.

Being considered a funny keynote speaker is serious business. Funny is hard to come by in a corporate or association setting. But Singer has embraced this and combined his natural witty stories with an intention to expand the experience of every audience.

Being a funny keynote speaker is not easy.  In all Thom Singer’s years as a speaker he has seen all kinds of presentations. He usually stays around at event to watch the other speakers who are on the agenda before him or after.  This is one way he learns.  Singer is always looking for ways to “Try New Things”, and this entrance into comedy fits into that commitment.

It is not the topic that dictates funny vs dull. It is the speaker’s experience and the culture of the conference. In most industries a funny keynote speaker who comes with real content can make the whole event more enjoyable for everyone.

Who can be funny:

Thom is clear that a business meeting is not a comedy club. Having a funny keynote speaker does not mean your speaker is doing “bits”. A speaker who is funny weaves humor into their message. It is not about a two drink minimum and getting laughs every thirty seconds (save that for the comedy club). The funny keynote speaker simply makes the meeting more fun. People like to laugh, and at most business and association conferences they do not do it enough.

When you find a speaker who can weave in some humor, your meeting participants have more fun. If they are having fun they engage more with each other. When they connect they feel the conference was a valuable investment of their time and money.  Thus, they come back year after year.

Content is important. But you do not have to sacrifice good learning to have funny keynote speaker. There are speakers out there who have both.

A recent group of at business meeting told Thom Singer after his talk that it was the most enjoyable talk of their day-long meeting. Why? Because it was funny.  A funny keynote speaker is not doing “stand up comedy”. A funny keynote speaker is delivering strong content, but layering it with stories that are designed to make people laugh.  When an audience laughs together, they share an experience and it makes them hold onto the content. The human brain is designed for to learn through stories. When those stories involve humor, everyone wins.  Humor in the workplace is proven to make people have less stress and perform better.

Many professional speakers lead with content and credentials, because if their speech is boring, they hope that the meeting planners and the audience will give them a pass on their speaking skills. To be a humorous speaker means you have to show up and have the right energy level, get participants to lean in, make them laugh, and at the same time deliver high level content. This is what Thom Singer will do when he speaks at your next event.

********
Thom Singer is a funny plenary speaker and engaging master of ceremonies / emcee. He can be booked through your favorite speakers bureau or directly at www.ThomSinger.com.