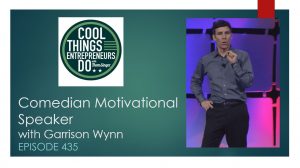 Nothing is less funny than a podcast interview about comedy.  Episode 435 is an interview with comedian motivational speaker Garrison Wynn. This conversation covers a lot of ground about his career and what makes things funny.
Garrison got into stand up comedy early, and it has impacted his whole career. He is one of the few comedians turned motivational speaker who has had a long and successful career as a motivational speaker. He has seen a lot of interesting things between the world of comedy, his Fortune 500 career, and the speaking business.
Nine months after his first open mic he was earning a living as a comic. He spent years touring, then took a job with a large company.
Today he is a professional keynote speaker.  On this episode we dive deep into comedy. Garrison has had a very interesting career path, and he is very open in this interview.  As a comedian motivational speaker he has learned to mix humor with real actionable leadership content.
It is hard to find funny in some rooms.  You need the right environment to get the humor to connect with the audience. Most people, even when they are funny, do not realize what makes them funny. There are many things that go into making humor work. This works to Garrison’s advantage, as a comedian turned motivational speaker, he started with this unique understanding of the funny.

Garrison helps people make the jump from being great at what they do to developing the qualities it takes to be consistently chosen for the job. He gets them to understand why their products, services, or leadership styles-or those of their competitors-are selected. As he says, “If the world agreed on what’s best, everybody would choose the best and nothing else would be considered. Decision making doesn’t work that way.” His presentations help people become more influential regardless of circumstances.
With talents that established him as a Fortune 500 leader and professional stand-up comedian, Garrison Wynn, CSP, fuses comic timing and research to deliver motivational business expertise.
For 20 years, he has given keynote presentations to clients (such as American Express, Wells Fargo, Oracle and NASA) at corporate and association events. He is the author of the Amazon bestseller The Real Truth about Success, the Amazon #1 bestseller The Cowbell Principle, has been a weekly contributor to the Washington Post and featured Forbes and Inc. Magazines.
In his teens he debuted the world’s first video gaming system (Odyssey) with baseball legend Hank Aaron and as a young man spent 6 years touring comedy clubs with the top names in the business. He went on to become the youngest department head in a Fortune 500 company’s history where he researched and designed processes for 38 company locations nationwide and developed & marketed products still being sold in 30 countries.
Looking for a comedian motivational speaker? Garrison Wynn can be booked through your favorite speakers bureau or directly at https://www.motivational-speaker-success.com/
Check out his first interview on Cool Things Entrepreneurs Do from August 2016.  https://thomsinger.com/podcast/long-term-success-with-garrison-wynn/

Thom Singer is the host of the “Cool Things Entrepreneurs Do” podcast.  He is also a motivational keynote speaker and professional master of ceremonies.  Thom took up stand up comedy at age 51 and began visiting comedy clubs, bars and coffee shops for open mic nights all over the country.
While he is not a comedian, he as become a student of humor. Singer is a motivational speaker turned comedian. While he does not put jokes into his keynote speeches, he has learned that comedy is the best teacher of timing and audience engagement.  Seeking a funny keynote speaker?  Call Thom Singer at (512) 970 -0398