Video Made Easy with Dataclay 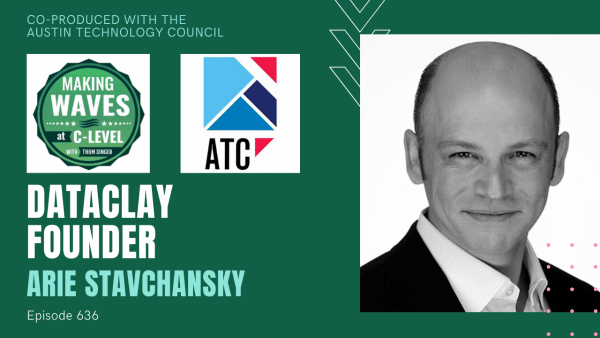 Episode 636 of “Making Waves at C-Level” is co-produced in partnership with the Austin Technology Council, the largest tech industry organization in Central Texas. ATC empowers members through insights, resources, and connections so their members can succeed and thrive. This episode is an in-depth interview with Arie Stavchansky, founder and CEO of Dataclay. Check out this conversation about pivoting to a profitable business model, making customers lives easier, entrepreneurship, and the city of Austin.
Check out this episode.  I especially like the quote “When you believe you are giving back, that is when society will reward you back”. Arie has a great attitude about entrepreneurship and growing a business. He also believes deeply about the “soul” of the City of Austin, and how that adds to the business success of those growing companies in the Texas Hill Country.

Dr. Arie Stavchansky is a multi-disciplinary professional. As a practitioner of digital media for more than two decades, he works in all phases of production and has carried the titles of designer, developer, creative director, and educator. An Austin native and first generation American, his cross cultural influences, diverse industry experience and extensive education inform his analytical, creative, and technical work.
Currently, he works to design interactive media products, code software applications, produce and direct video content, and guide creative and technical professionals toward delivering innovative solutions.
Arie completed his Ph.D. in Digital Media Studies and Production at The University of Texas at Austin. For his dissertation he researched how video production techniques affect viewers’ trust in television news. He also holds a Master of Design in Interaction Design from Carnegie Mellon University and a B.S. in Radio, Television, Film from UT Austin. After completing his doctorate, he worked as a lecturer at UT Austin educating graduate and undergraduate students.
His industry experience spans across a range of brand and studio sizes. He has worked on shipped products for well-known companies such as Nintendo, Warner Brothers, Sony, Dell, and Cisco Systems. Agencies and studios he has worked with include Chicago-based Digital Kitchen, Los Angeles-based Mac Guff, New York-based Radical Media, Sony Online Entertainment and NFL Digital. Currently he is founder of Dataclay, a company providing automation systems for video production workflow.  Enterprises such as Netflix, Amazon, Apple, the NFL, facebook, Google, Saatchi & Saatchi, and NBCUniversal have adopted Dataclay’s technology to automate their video production needs for various distribution channels.

Dataclay was founded in 2014 with a simple but important mission: to free video content creators from the inefficiencies of menial data entry, empowering them to develop greater quantities of higher quality content in less time, and with less cost.
Since then, their mission has broadened to enable new modes of video communication. They want to improve the way video is created and consumed. The team at Dataclay believes in the power of customized video to forge strong connections between video creators and their audiences. These connections facilitate better customer experiences and can enrich the lives of viewers.

Thom Singer works for Stanton Chase, a leading executive search firm that specializes in helping companies and associations place key hires. He is also a keynote speaker and professional master of ceremonies / EmCee
.
After a successful career in sales and marketing, Thom Singer became a growth leadership speaker in 2009. A decade later he has brought his high energy presentations and action-oriented content to over 900 audiences. Thom knows that as the speaker or master of ceremonies he has a responsibility to set the tone for a strong conference attendee experience. Known as “The Conference Catalyst” he creates an atmosphere of fun and interaction that lasts beyond his presentation.
.
Thom earned his Certified Speaking Professional (CSP) in 2014 and is committed to the business of meetings. He is the author of 12 books and is the host of the popular “Cool Things Entrepreneurs Do” podcast. On his show he has interviewed over 400 entrepreneurs, solopreneurs, business leaders and others with a focus on discovering how the most successful people get farther across the gap between potential and results.
In 2021 Thom co-founded the soft skills training company “Sculpt Development” with three friends.  This company allows smaller organizations to provide state of the are business education to their teams.
.
At 50 years old Thom decided to reinvent his life and make age 50 to 75 the best years of his life. This meant saying yes to things that scared him, and trying new things. Since that time Thom has jumped off buildings, took up running (and lost 30 lbs) and began performing stand up comedy.