Stand Up Comedy Over Age 50. It’s Okay Not To Be Good 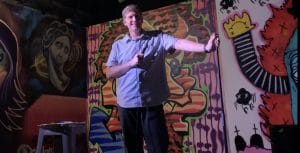 A little over a year ago I tried stand up comedy for the first time. Comedy is the hardest use of the spoken word.  I have given over 850 professional speeches in my career and have hosted nearly 500 episodes of my podcast.  Talking is something I can do.  Telling jokes is not my forte. Nothing prepared me for the journey into stand up comedy over age 50.

My commitment to trying my hand at 100 open mic nights was a chance to challenge myself in an area where I was not good. I have figured out that, like many, I have avoided trying things that were out of my comfort zone. Looking back at my life (so far) my regret is I have worried about how others would judge me. My wish was that I had been willing and able to be free from these concerns, but they have been very real. Held back by these fears my best self was not set free.

It’s Okay Not To Be Good

Here is the thing. In order to show up at open mics and attempt new material you have to be willing to suck. My early times were greeted with crickets. What’s worse is because I was an outsider, few comics spoke to me for the first ten months of my journey into comedy. Still plagued by wanting to fit in and not be judged, I wanted to quit several times.

Then I realized that not being good, but staying in the game while looking for ways to improve was the key to success. It took me 50 open mics and nearly a full year to get real laughs. It was about that time before any other comics said “great set”.  By the time I head the compliment, it didn’t matter. I am not doing this to be the cool kid in the room. Hell, I am old enough to be dad to everyone in the room.

Wanting approval holds back risk taking. I have come to lean that great opportunity comes from trying new things and pushing yourself beyond your normal activities. When we do the same things, we get the same results. Stand up comedy has been this vehicle that has caused me to discover how to improve myself.  I have a new respect for myself and for others. We are all on our own journeys. I wanted approval for too much of my life. But waiting for feedback that you are good is not the way to grow.  Comedy has immediate and real feedback.  People laugh or they do not.  And if the don’t laugh, it’s okay. Retool the joke next time or try something new.

Saying yes to doing comedy showcases was a huge step out of my comfort zone. I got used to open mic nights. They stopped being a push. When I was asked to do five minutes in a show in Phoenix I spent two weeks reviewing my material. No notes. I had to deliver it all.  It was like a whole new level of comedy.  The next two shows were both ten minutes, and I was paid.  That put a new spin on it. Did this really make me a “professional comic” (I still have trouble saying “yes” to that).

Now I am going to try my hand at hosting my own open mic night at a bar.  As I looked at the way I am going to do it, I had a ping inside me that some comics may not like that I will limit the show to 20 spots. Then I remembered I am not looking to be at the cool kids table. I want to improve my comedy and host a show that is a good experience for everyone (audience and comedians).  I am worried I am not ready to host a show weekly. And that is why I said “yes”.

The struggle for me is to write compelling comedy that is actually funny. I am a performer on some level, and while I need to fine tune my stand up comedy skills, the difficulties is in the writing. Finding the punchline is not easy. I think of a lot of funny scenarios, but need to work to wrap it all together. This is an analogy for all who face learning. The problems are real, but the answers are there, and inside of ourselves. My efforts to write comedy makes me see all areas I struggle in a fresh light.

Just because it is hard does not mean I should not work on the skill. It is because it is hard that we all should take on new projects. If I had done this when younger I wonder what I could have accomplished in decades of trying new things.

Comfort In Being Judged By Others

Standing in front of a dark room filled with people who are judging you is life changing.. For me, it has been freeing. It is better than how we are often reviewed by others. We are all being judged all the time, but we pretend it isn’t happening. Friends leave your house and gossip about how you raise your kids. They comment on your furniture or your weight. They roll their eyes and have superior feelings. It is part of our personal and professional lives. I am finally over those types of people and do not need their approval. Comedy has helped with this. Bombing at dozens of open mics can cut the chains of needing approval from fake friends.

I have had friends and co-workers who were secretly more critical than any comedy audience. However they hid it behind politeness. They hide behind cheery smiles. We know they are not really there to support us, but we hang onto their friendship. Many of us are scared of doing things like stand up, because of those people in our lives who might roll their eyes. The best thing you can do is to understand your real friends are just proud of you for trying.

Let the haters hate. I don’t care. I am now comfortable being judged.

The most interesting thing I have found is that I am not alone at wanting to change. Some call it reinvention.  I call it improving as a person. This goes beyond doing stand up comedy. It comes to being brave in my actions and not caring what people think. This is not an over 50 thing. People at all ages feel disconnected. Many are seeking something more than they have in their lives and jobs.

Comedy has been my vehicle in the last year to push my limits. Along the way I have discovered lessons about fear, fitting in, privilege and bias, courage, ego, self image, hopes and dreams, etc…  I had no idea that this would become an adventure. There is countless appreciation about how my family and closest friends have supported these efforts. It has been interesting to see the responses from others, both positive and indifferent.

My life is about half over. Probably over half over. Yet if I have 30 or 40 years ahead then the person I get to become is different than the one I was in the past. Learning and growing is the joy of being a human. The unknown of the future is frightening, but at the same time it is exciting.

It is okay not to be good. This is my lesson from starting stand up comedy over age 50. I want to try new things. There are many things to attempt every day. I want to not be great, but have fun. The hope is to get better with continued effort. If I fail, it is okay. When people make judgments who are not in my inner circle of family and friends, I do not care.

Thom Singer is an engaging keynote speaker and master of ceremonies / EmCee. www.ThomSinger.com