After the pandemic, networking at conferences is more important than ever before.  Your people are coming to your events and they are hungry to connect.  If you leave networking to be a second tier priority….you will get 2nd tier results.  Thom Singer is “The Conference Catalyst” and he will work with your to kick-off the meeting and give people actionable content to help them make your event AMAZING,  If you care about networking at in-person events, you should call Thom and talk.  Maybe he is what you need to create the best event ever and get people to network.  A networking speaker is a MUST HAVE on all agendas in 2021.

Cultivate A Relationship Driven Conference – Choose An Experienced Networking Speaker To Set The Tone For Human Engagement At A Live Event!  The topic of business networking is surging in popularity in 2020 business and association conferences.  An expert “Networking Speaker” is a must have for everyone in this COVID and post-COVID world. I have been working with organizations for 15 years teaching people how to connect with people in a virtual world.  Suddenly in 2020 the “virtual world” has taken on a whole new meaning as in-person events were canceled and people began social distancing.  If you organization is planning a virtual of hybrid meeting, I have seen a lot of ways that work (and do not work) to get people to engage and network.  People still do business with those they know, like, and trust, and human connections are more important than ever. 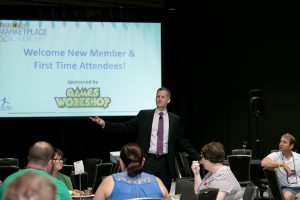 Networking Is Important for Everyone

As a professional keynote speaker, I have learned many things in my career. The first one is that networking is important to everyone. I began my career as a full-time speaker in April 2009. That was in the height of the great recession. Being a networking speaker meant there were a lot of people interested in the topic. Networking mattered. For those who remember, that was the worst part of the economic downturn.

Millions of people were laid off from jobs across industry lines. The outlook for the economy was not good. With so many people out of work, and limited jobs, networking considered important. But not everyone knows how to network, nor do they understand the scope of all that is involved in establishing the right connections. Many associations were actively looking to help members create career opportunities. A priority for every agenda was a “networking speaker”.

The original topic I was hired to present was about how to connect better with people in a world being overrun by digital and social media tools. My presentations were unique, and I was quickly one of the business networking speakers working at association conferences.  I got involved with meetings industry and association trade groups and became one of the go to networking speakers during the recession. With real actionable content about how to connect better, my career took off quickly.

People were out of work, and associations found the networking topic important for their members. Many groups worried that their industry’s issues would keep people from attending their events. The smartest planners doubled down on finding content that could have instant impact on their member. I saw myself and other networking speakers being booked for multiple years in a row at association conferences.

My Role As A Networking Speaker

Being a networking speaker has been a journey. I wrote several books on the power of business relationship and how to stand out in a competitive world. I appeared on many TV news shows talking about the importance of networking inside and outside your industry. And I have interviewed hundreds of business leaders about what has made them successful.

Yet the smartest thing I did as a keynote speaker happened by accident and solidified my role as a premier networking speaker.

In 2010 I became known as “The Conference Catalyst”. In one of my presentations the audience questions turned to how to network better at the conference they were currently attending. The answers centered on how how to engage at coffee breaks, happy hours, and other social situations over the following two days.

The response was overwhelming. The meeting planner was thrilled, as she knew instantly that the people at her event were going to be more comfortable networking. She told me the speech was good, the the Q&A session was worth ten times my fee. This excited planner added that I set the tone for a conference culture of connecting. It was this woman who named me “The Conference Catalyst”.

This one conference changed my career for the next 7 years. I embraced my role as one of the best networking speakers, and shared stories on how to connect. The exciting part is that I then had to live by what I taught, and the connections brought me new business.

I am on a mission to stop boring meetings. A networking speaker brings the ideal topic to ensure people have more fun. All surveys show that when people feel they had a great social experience, they come back year over year. All your speakers should be dedicated to raising the level of fun and connections.

As the economy improved and people forgot about the recession, they began to roll their eyes at the topic. I pivoted and adapted, and have created other topics. But I am still a networking speaker, and my “Connecting with People in a Gadget-Crazed World” keynote will provide real value to a conference.

A young prospective client told me recently that she would not bring in a networking speaker, as the economy is so good, that there is no need to give that lesson. I disagree. We need to network in good times and bad times.

There will be another recession someday (maybe soon?). If people wait to understand how to network until they are unemployed in a downturn, their path to a new job could be blocked. You have to network and build relationships in good times. By doing this you will have established relationships for the rough times.

If your association is hosting an important meeting, you may want to consider kicking off the event with a networking speaker. I will work to create a culture where people will be encouraged not only to network back home, but while they are on-site at your event. When people connect better with each other, everyone has more fun at the conference (and are more likely to come back next year).

For those associations whose membership will be impacted by an economic downturn, “The Conference Catalyst” could be the perfect answer to helping them realize that their membership in your association is their way to success no matter what is going on in politics or the economy. There is value in the community, but they have to understand that in good times so they will keep renewing no matter what is going on in the world.

Let’s chat about your desire for a networking speaker who will create engagement at your next conference. As a motivational speaker, I promise you meeting will be better when I weave my stories and content around your meeting theme. Motivation and inspiration make a difference, and together we can create a culture for better networking that will make your event memorable.

I am often asked about Speed Networking events. I have seen them done well, and I have witnessed sessions that were flat. The key is in the planning.  Also, who you select to run the Speed Networking Session will directly impact the success. (Read this blog post on Speed Networking that I added in May 2019).  As your networking speaker I will do more than speak and leave. I will model how to engage by participating in your event and hosting other sessions (breakouts, after-dinner speaker, awards ceremonies, etc…)

Since I wrote this blog post I have talked to several people about why a NETWORKING SPEAKER is a good fit (or not a fit) for their conferences. A very wise meeting planner said that in selecting a speaker she must ensure that the topic is important to her association’s members. In the current booming economic situation she thinks people do not see the value. Jobs are available. Her feeling was that “networking” will become a more popular topic when the economy goes down.

However, you cannot wait to make networking a priority until you need something. If you start building industry relationships and showing up at your association events only when you looking to get something, it wont work.

Now is the right time to hire a networking speaker to inspire your association members to engage in the industry, volunteer, and serve the community. Those who make that part of their lifestyle will be the ones who are seeing opportunity during the next recession.

The New Networking is not just about business cards and elevator pitches.  The new networking involves the whole person. As a networking speaker I cover all of the complexities around how to connect with people in our gadget-crazed world.