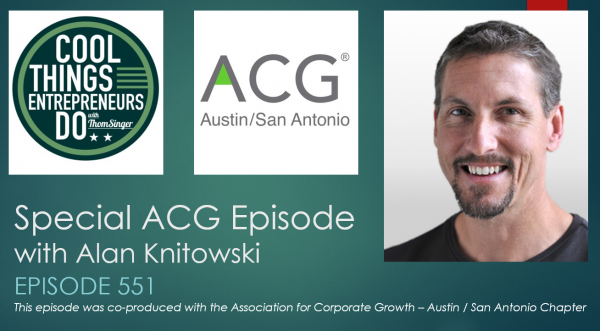 The speaker for the April 8th Association for Corporate Growth luncheon in Austin was to be Alan Knitowski, CEO and co-founder of Phunware.  Because of the COVID-19 situation, ACG Austin/San Antonio had to cancel their live events for the short term, but they wanted to ensure they could still provide quality local content to their members and extended community.

This interview with Alan is an hour long masterclass in success. In this conversation he talks about his career path, the building of Phunware and taking the company public, plus he shares his advice for business leaders on how to handle crisis and uncertainty.

ACG Austin/San Antonio is grateful to Alan for taking the time to do this interview. His support of the business community in Austin, Texas, the US, and the world is clearly evident in the message he shares.  ACG ASA looks forward to having Alan speak in-person at a future event, but in the meantime, please enjoy this podcast interview.

***Disclosure:  Thom Singer, host of “Cool Things Entrepreneurs Do” is the husband of Sara Singer, the Chapter Executive of the ACG Austin/San Antonio Chapter.

Alan is a successful serial entrepreneur with multiple exits over a 15 year period to companies including Cisco Systems (NASDAQ: CSCO), Level 3 Communications (NASDAQ: LVLT) and Internet Security Systems (now NYSE: IBM). He is a 2014 Finalist for the Ernst and Young Entrepreneur Of The Year Award for Central Texas and has been a Founder, Executive, Angel Investor and Fund Manager throughout his career in the private sector after serving in the United States Army as an Airborne, Air Assault and Ranger qualified Captain in the Corps of Engineers.

As a mobile and multiscreen industry expert, Alan is frequently quoted in trade publications, serves as a panelist at industry events and writes for the Wall Street Journal’s Accelerators Blog.

Previously, Alan was President of Alternative Investments for Curo Capital LLC and Managing Director for Trymetris Capital Management LLC. In the past, he was a Co-Founder and Director of Telverse Communications, a next-generation advanced services ASP focused on wholesale communications services for carriers and service providers, which was acquired in July 2003 by Level 3 Communications.

Before this time, Alan was Director of Marketing for the Voice Technology Group at Cisco Systems and was responsible for business, market and community development, including business planning and strategy for Cisco’s global packet communications initiatives. In November 2000, Alan joined Cisco as part of the Vovida Networks acquisition, where he served as Co-Founder, President and Chief Executive Officer and led the company from idea conception through its eventual acquisition by Cisco.

ACG Austin/San Antonio would like to thank their annual sponsors:

.
Thom Singer is a keynote speaker and professional master of ceremonies / EmCee
.
After a successful career in sales and marketing, Thom Singer became a growth leadership speaker in 2009. A decade later he has brought his high energy presentations and action-oriented content to over 900 audiences. Thom knows that as the speaker or master of ceremonies he has a responsibility to set the tone for a strong conference attendee experience. Known as “The Conference Catalyst” he creates an atmosphere of fun and interaction that lasts beyond his presentation.
.
Thom earned his Certified Speaking Professional (CSP) in 2014 and is committed to the business of meetings. He is the author of 12 books and is the host of the popular “Cool Things Entrepreneurs Do” podcast. On his show he has interviewed over 400 entrepreneurs, solopreneurs, business leaders and others with a focus on discovering how the most successful people get farther across the gap between potential and results.
.
At 50 years old Thom decided to reinvent his life and make age 50 to 75 the best years of his life. This meant saying yes to things that scared him, and trying new things. Since that time Thom has jumped off buildings, took up running (and lost 30 lbs) and began performing stand up comedy.