Episode 544 of “Cool Things Entrepreneurs Do” is a wonderful interview with entrepreneur Tucker Max.  You may have heard of Tucker in the past.  He came to fame about 19 years ago with a funny email to friends (that went viral) where he lambasted the law firm where he was a summer clerk.  He was fired a week later, but not because of the letter (you have to hear the real reason).
Tucker went on to be a famous blogger and book author, highlighting his bad-boy “fratire” lifestyle.  But today Tucker Max is a married man, father of three (thinking about a 4th), and a successful business entrepreneur.  He is the co-founder of Scribe Media…. an Austin based book writing and publishing company.  Having written 12 books, Thom Singer understands what it takes and appreciates the service that Tucker and Scribe provide.
Check out this episode. 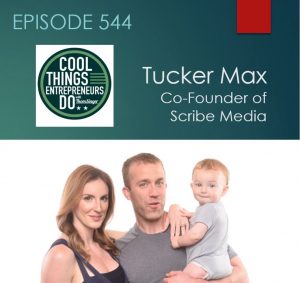 Tucker Max is the co-founder of Scribe Media, a company that helps people write, publish and market their books.
He has written four New York Times Best Sellers, which have sold over 4.5 million copies worldwide. He’s credited with being the originator of the literary genre, “fratire,” and is only the third writer (after Malcolm Gladwell and Michael Lewis) to ever have three books on the New York Times Nonfiction Best Seller List at one time. He was nominated to the Time Magazine 100 Most Influential List in 2009.
He received his BA from the University of Chicago in 1998, and his JD from Duke Law School in 2001. He currently lives in Austin, Texas, with his wife Veronica and three children.

Thom Singer is a keynote speaker and professional master of ceremonies / EmCee
After a successful career in sales and marketing, Thom Singer became a growth leadership speaker in 2009. A decade later he has brought his high energy presentations and action-oriented content to over 900 audiences. Thom knows that as the speaker or master of ceremonies he has a responsibility to set the tone for a strong conference attendee experience. Known as “The Conference Catalyst” he creates an atmosphere of fun and interaction that lasts beyond his presentation.
Thom earned his Certified Speaking Professional (CSP) in 2014 and is committed to the business of meetings. He is the author of 12 books and is the host of the popular “Cool Things Entrepreneurs Do” podcast. On his show he has interviewed over 400 entrepreneurs, solopreneurs, business leaders and others with a focus on discovering how the most successful people get farther across the gap between potential and results.
At 50 years old Thom decided to reinvent his life and make age 50 to 75 the best years of his life. This meant saying yes to things that scared him, and trying new things. Since that time Thom has jumped off buildings, took up running (and lost 30 lbs) and began performing stand up comedy.