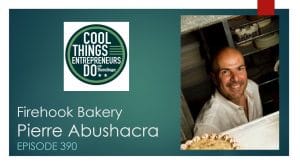 Pierre Abushacra shares his story of entrepreneurship from immigrant to banker to CEO of Firehook Bakery.

He was born in Beirut Lebanon where he lived until the age of 7 when, in 1974, he moved to Greece with his family to escape the civil war in Lebanon.

In 1984, at the age of 17, his mother’s experience as a Lebanese pastry chef allowed the family to immigrate to the US and become US citizens.

Pierre graduated from George Washington University’s School of Business with a major in Finance in 1988 after which he worked in Washington DC in private banking for 4 years.

What’s with the name Firehook?

FIREHOOK is not just a superfluous name concocted to make us sound cool behind the ovens. It is actually a name rich in ancient history. When bread was first being discovered, bakers used a hook-shaped tool, called a Firehook, to pull baked loaves out of the fire. Over time, bakers themselves came to be known as “Firehooks”, synonymous to “bread bakers”. So aside from sounding really cool, Firehook has a purpose.

Check out episoe #390 of Cool Things Entrepreneurs Do to hear his journey.