Generation Y – The Future is Here

Speaker at a Millennial Event 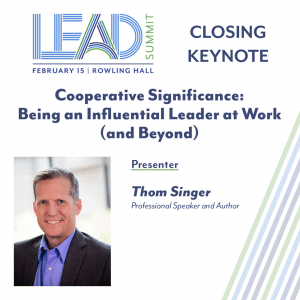 This week I have the honor of being the closing keynote speaker for a group of young professionals at the Austin Young Chamber LEAD event in Austin, Texas..

I am excited about this group because in the last few years I have presented to dozens of groups of “Next Generation” professionals at company and association events.  Every time I leave these conferences fired up about the future

Too much is said negatively about millennials, but my experience is they are an ambitious generation who are all eager to learn, grow and succeed

Think about it, has there ever been a generation in the history of mankind that did not seek to learn, grow, and succeed?

The LEAD Summit (Learn | Explore | Act | Develop) is a one-day event that is focused on learning and action. Participants will choose sessions in the areas of professional growth, community and civic leadership, and personal balance.

The summit will create real change by educating and connecting young professionals with influential business leaders, the community, and each other. This event is the place where the best get better.

My presentation this week is called “Cooperative Significance, Being an Influential Leader at Work (and Beyond)”. In this closing keynote I am going to share some of the best ideas on how to be significant. Most everyone I speak with (regardless of their age) has a desire to make a difference in the communities they belong. However, we cannot be significant alone in a field.  We need others.

In our digital focused world, we must find ways to have meaningful conversations with others that lead up to strong relationships. If someone desires to be a leader, they must have people who are willing to follow them. Followers in life are not the same as followers on Instagram.

Over the last decades much has been written about Generation Y / Millennials. The millennial generation is probably the most over studied group of young people over any 20 year period. Members of this generation have been called lazy, a lost generation, social media natives, echo boomers,  and stuck in basements living with their parents.

Those born between 1980 and 1996 are now young adults (the oldest of them are not that young anymore, as their 40th birthdays are coming up fast). These “digital natives” did grow up with more technology than older generations, but they are not that much different than the baby boomers born in the 1950s and 1960s, or their immediate predecessor generation, Generation X (where I fall in the generational chart).

People are still people, even when they grow up in different eras and have different experiences. If you read the stories in the bible you will find that many of the human struggles we all face at different life stages are still the same. There has always been lust, greed, wars, famine, relationship struggles, business issues, and political leaders who were controversial.

Since World War II and through the time of the Cold War we become fascinated with clumping people together by blips on the charts of birth rates. While I am never going to discredit the statistical research, the trends reported do not show the true make up of the real people in any generation.

Per the stereotypes about Millennials, I think they have received the short end of the stick in most of the reporting on their generation.  With 75 million millennials in the United States, I simply do not find them to be “one thing”. There are many who are ambitious and many who are lazy.  There are those who live at home, and those who successfully have lived on their own since age 18. Like all groups, the stereotypes do not do them justice.

Quotes like the below, about the following generations have been around for thousands of years:

“They [Young People] have exalted notions, because they have not been humbled by life or learned its necessary limitations; moreover, their hopeful disposition makes them think themselves equal to great things — and that means having exalted notions. They would always rather do noble deeds than useful ones: Their lives are regulated more by moral feeling than by reasoning — all their mistakes are in the direction of doing things excessively and vehemently. They overdo everything — they love too much, hate too much, and the same with everything else”.  —Aristotle

We have spent the greater part of the last twenty years talking about how the older groups must change to work with the Millennials, but what is most interesting to see is how much of what was said about this group is not as different as predicted. It was stated many times they did not want to live in suburbs, but that is not proving true. While they are getting married later than previous generations, the older side of this group are buying homes in established neighborhood once they are married and have children.  This seems to be exactly what has been done by humans in the United States since the industrial revolution.

I live in a nice neighborhood, but clearly “the suburbs”. Each house that goes on the market sells quickly to a couple in their mid-thirties. The millennials are moving into the suburbs.  Hmmmmm.

Two of my closest friends are both 29 years old.  Our friendship began with me as their mentor, but now they are more like my fake sons.  I spend a lot of time with them, and they seek my guidance on issues about career and life. They are often amazed when my assessment of a situation is correct, and they ask “how did you know?”.  The answer? Because I am old and I have seen most of these situations in business and relationships happen to me or my friends.

Yes, the world has changed, but people are still pretty much the same. I think the media attention on each generation as so drastically different from each other is not bringing us closer together in our society. Wedges are placed between these groups, and none of us win when we are parted.

The Next Next Generation

And now in 2019 with the college graduation of the oldest people in the next group, Generation Z, the media attention is leaving the millennials and being placed on those people born after 1997. Forbes recently published an article, 11 Tips for Welcoming Generation-Z To the Workforce. The article cautions business owners and managers that they again must be ready to change to meet these new new employees.  While I agree that there are differences, I think the reality is we are making giant assumptions that they are going to be difficult.  Aristotle already showed us that youth are always different. But it is not better or worse.

The best tip in the article is the last one. “Leave your assumptions at the door”.  This is advice I have been giving to audiences for over a decade, no matter what generation you come from (as we all have assumptions about those who are different from us).

When the Generation X crowd was very young there was a popular movie called “The Bad News Bears”.  The coach in the original version of this movie was played by actor Walter Matthau. He instructed the team to never assume anything. Then he wrote the word A-S-S-U-M-E on the chalk board and told the little leaguers that “when you assume, you make an ASS out of U and ME”.  This has stuck with me my whole life (probably because they said “ass” in a movie… wild stuff for 1976).

I get so excited to speak to Generation Y / Millennial audiences, and welcome the Gen Z business professionals into future conferences where I will present.The event this week is designed to inspire the future leaders in my community, and I am thrilled to be part of the program.

I have found that young professionals are the most engaged people at every business conferences. Several years ago there was concern that live face-to-face meetings would die out as the younger Gen Y groups took over the business world. This is not what is happening.  The opposite is true. Younger professionals are actively seeking connections at live events. The LEAD Summit will have over 300 people in attendance and it will be amazing.

It is going to be an amazing event.

Thom Singer is a motivational keynote speaker and professional Master of Ceremonies / EmCee.  He is also the host of the popular Cool Things Entrepreneurs Do Podcast.