Why Hire An EmCee? – Make The Event Better

The EmCee sets the tone for a better conference experience

When you hire an EmCee, you change the feeling of an event. The event MC is often overlooked, but wow does he or she make a difference. Having a master of ceremonies / EmCee can help ensure the meeting is more fun.  I am on a crusade to stop boring meetings. 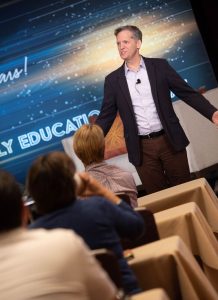 There are many things that have to stay the same at large company and association events. However, a good host can be different, without being a wild risk. Meeting planners and committees are always seeking ways to shake things up. But the reality is we still meet in conference centers or hotels, serve meals, have coffee breaks, hire speakers, schedule breakout sessions, etc… There are not many things we can do to inject fresh blood into the veins of a conference.

One way that groups bring a new spark to their events is to introduce a outside professional master of ceremonies / event emcee into their agenda. While this does not seem like a way to create change, it can be exactly what is needed to put a welcome twist into the experience.

Pick Your EmCee for the Right Reasons

Most companies that host internal or customer meetings will utilize an internal executive to serve in the role of EmCee / Event Host. The CEO, director of marketing or the sales manager is usually the one to do this job because they have an outgoing personality or are the primary stakeholder for the outcome of the meeting.

Associations will usually have their board chair fill this role, regardless of their ability to speak publicly. When asked “Why?” it is often said that they are rewarding these people with the stage time, but the real reason might be to save money by not hiring a professional.

If either answer is true, it is wrong. All major decisions made in planning an event should be about the attendee experience. Giving the Event MC role to a board member as a chance for them to get known in the company or industry, or saving a tiny amount of the overall event budget is not serving the participants. If the motivation around who is emcee is not about how it impacts the audience, then we are undermining the success of the conference.

Why Hire and EmCee?

Too often planning committees have other motives around the agenda that are not audience driven. When cost comes into the equation and they seek areas to save money, the needs of the participants takes a back seat. Yes, events are expensive. The cost of a coffee break is huge (hotels and conference centers have made coffee more expensive that gasoline at events), but you wouldn’t skip serving coffee.

Why hire an EmCee? Overall, an EmCee will have a better chance on impacting your meeting than just about anything else. Who hosts the event should be among the most important decisions and decided in the earliest phases of planning. It should be more important than who are the keynote speakers and whether or not you will have chocolate fountains on the dessert table.

Hollywood award shows all have a host for a reason. While the Academy Awards in 2019 is looking to try going without an MC (following controversy), I doubt that will stick in future years. They actually attempted to do this in 1989 and it was considered a good show. They went back to having a main host for a reason. The Academy Awards broadcasts we remember as the best are the ones when the host was spectacular (think any year with Billy Crystal). Giving out awards is boring and so are most conferences (lets face it). But a strong personality who can serve as a strong thread that runs the through the whole show is paramount to the success.

Three ways an EmCee will impact your conference

Many groups, after enlisting the services of an outside master of ceremonies, wonder why they had not done this before.  The MC becomes part of their planning committee.  When you hire an EmCee you should look for someone who will get engaged in the months leading up to the event. A great EmCee will have amazing ideas on who should be the keynote speakers, and how to find them.  The cost for an MC for three days is not as much as some think (It is not equal to three keynotes). Many EmCees will be engaged in all aspects of your conference, not just when they are on stage.  The EmCee should see themselves as the host, and always be present with the participants.

More Than an EmCee / Master of Ceremonies

When you hire and EmCee you are doing more than putting someone on stage to introduce speakers. The right MC becomes part of your event planning team. Seek out an EmCee that will work with you before, during and after your event to ensure you have the best conference ever. A professional master of ceremonies has been to dozens or hundreds of conferences and sees the whole picture. Too many times groups utilize their internal VIP who is only focused on the role of the company or the association, and they do not understand their part the EmCee plays for the audience.

A professional EmCee brings a level of professionalism to a conference. If your organization has never used an MC for your conference or other large meeting, consider this a way to up the game and make the whole experience more engaging for all attendees. Hire an emcee and change your meeting for the better.

Thom Singer is a motivational keynote speaker and a professional master of ceremonies.  He is also the host of the Cool Things Entrepreneurs Do podcast and the author of 12 books. He can be booked via your favorite speakers bureau or directly at www.ThomSinger.com